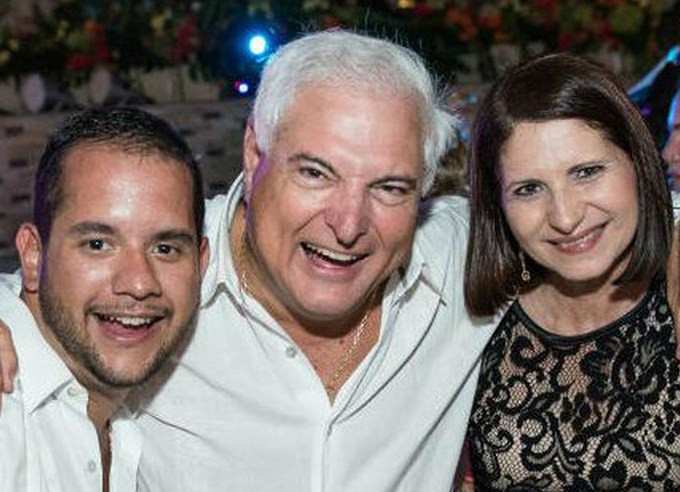 de Obarrio, Martinelli and his wife Marta in happier times

The  name of the fugitive  Adolfo Chichi De Obarrio the   former  private secretary of ex-president Rivardo Martinlli  surfaced in the Martinelli  spying  trial, on Monday June 3 when a protected witness revealed  that he had access to an email that the former  director of the National Security Council (CSN) Ronny Rodríguez sent to  De Obarrio .

In the email Rodriguez stated that the Da Vinci equipment team, provided by the Hacking Team for espionage, was causing problems.

The witness explained that in the mail, sent by the company RCS Support and of which De Obarrio was notified -, it is mentioned that the team had synchronization problems.

He specified that the bandwidth for the DaVinci team's servers was not enough, so the system gave many problems and this caused loss of information that could not be recovered later.

He indicated that the equipment was not registered as CSN assets.

He said that he met De Obarrio during one of the training sessions that took place in the offices of the Super 99 in Punta Pacifica for the handling of the spy equipment , and that on that occasion de Obarrio he invited him for lunch.

He recalled that this system had many problems for its operation and required that the servers be restarted frequently to update it.

He said that he also recognized emails sent by Ronny Rodríguez and William Pittí, (both current fugitives) who together with him composed the team that handled the wiretaps, in which they were given instructions to activate the Da Vinci equipment and that they were delivered by the company in charge of providing technical support.

Aurelio Vásquez , from the team of public prosecutors , acknowledged that there is an email in which De Obarrio is mentioned and that there is judicial inference from those who were interested in the private lives of many people.He warned that this situation will be assessed by the judges at the time of sentencing and that all the evidence presented will be reviewed.

During the hearing, the protected witness also reported that he reviewed at least 80 emails corresponding to interceptions made by CSN officials in 2012.

They  intercepted emails of Democratic Revolutionary Party (PRD),like   Juan Carlos Navarro and Mitchell Doens , which listed the donors to of the party, and the information was sent to a local newspaper.

He  identified emails listed the names of multiple  wiretap victims and recalled that No. 1 (as Martinelli was known in the CSN) was interested in the information .

In  one conversation, reference is made to the lawsuit filed by Martinelli against  Juan Carlos Varela - then Vice President and now President for $30 million.

Popi Varela had another conversation with the ex-deputy Alcibiades Vásquez,  in which details were given of large sums of money assigned to deputies of the National Assembly.

The witness also admitted that  emails of  former presidential candidate Balbina Herrera were intercepted ,  and she  was one of the "targets" that were monitored permanently