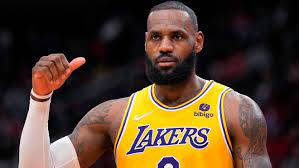 Major figures in American sports, from soccer player Megan Rapinoe to NBA star LeBron James, expressed their shock and anger on Friday after the Supreme Court's decision to strike down the country's constitutional right to abortion.

The decision of the highest court, which can lead to the prohibition of pregnancy terminations in about half of the states, prompted a joint statement from the men's NBA) and women's WNBA basketball leagues.

"The NBA and WNBA believe that women should be able to make their own decisions regarding their health and their future, and we believe that freedom should be protected," said the commissioners of both leagues, Adam Silver and Cathy Engelbert.

"We will continue to advocate for gender and health equity, including ensuring that our employees have access to reproductive health care, regardless of their location," the text stressed.

In a more forceful message, the WNBA Players Association recalled that the Supreme Court, with a clear dominance of the conservative sector, released its sentence only one day after it reaffirmed the right of citizens to carry firearms in public.

“Are we in a democracy where weapons have more rights than women?” the association questioned in a statement. "This decision shows a branch of government that is out of touch with the country and with any sense of human dignity."

This decision will create a "dangerous path" towards the prohibition of abortion that "reinforces economic, social and political inequalities," the text said.

Sue Bird, one of the great stars of the WNBA and winner of five Olympic golds with the United States, limited herself to writing: “Disheartening”. Her team, the Seattle Storm, declared themselves "furious and ready to fight."

"People have gained the freedom to buy guns with impunity while women have lost the freedom to decide their own future," the Seattle Storm cried out on Twitter.

Lexie Brown, star of the Los Angeles Sparks, added: “How did we get here? There is so much going on in this country and this is what they want to focus on. It's really scary."

Megan Rapinoe, an American women's soccer icon, and activist spoke out on the issue at a press conference ahead of the weekend's friendly against Colombia.