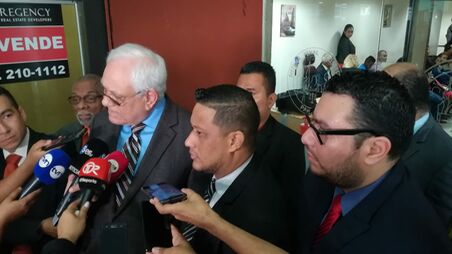 Complainants say they have the resources to overturn court decision

Six complainants  and a public prosecutor have processes  underway to attempt to overturn the acquittal of former president Ricardo Martinelli charged with illegal interception of communications and theft of $13 million worth of surveillance equipment purchased with funds from the National Assistance Program (PAN).

The Public Prosecutor's Office and the intervening plaintiffs seek the formal annulment of the ruling..

that declared him not guilty of the commission of political espionage and peculation crimes.

Both parties attended, at the offices of the First Judicial District of Panama on  Wednesday, August 28.

The six complainant victims have been divided into two groups of three. In one are Rosendo Rivera, Rubén Polanco, and Juan Carlos Navarro , who announced that they will present a letter of annulment "with concurrent grounds of appeal," against the acquittal in favor of Martinelli. Meanwhile, the senior prosecutor against Organized Crime, Ricaurte González , announced that he will also file an appeal for annulment. They have eight days to do it.

It will be up to the Court of Appeals to address these remedies.

In the other group of complainants are Balbina Herrera, Mitchell Doens and Mauro Zúñiga who will present the appeal before the Criminal Chamber of the Supreme Court.

"Most of the magistrates are prevented or contaminated for having known this process at some time," said Nicomedes Díaz, lawyer for Juan Carlos Navarro.

Navarro commented on the judgment of the trial court, which declared Martinelli not guilty on August 9 and was formally read on Monday.

"It is incredible and absurd that such things happen in Panama. The only thing we ask is that justice be done and these incidents never be repeated, that the right to communication, the right to privacy and constitutional rights be respected. May the serious violations of Panamanian human rights never happen again, "said Navarro.

According to the judges of the court - Roberto Tejeira, Arlene Caballero and Raúl Vergara - the accusation failed to prove its  theory of the case , since a lot of reasonable doubts emerged - for example, in relation to the protected witness - that led to the acquitted of the accused .

Martinelli faced a sentence of up to 21 years in prison for the alleged commission of four crimes: inviolability of secrecy and the right to privacy, and two forms of peculation (use and embezzlement). However, the judges considered that, with respect to the first two crimes, the absence of judicial authorization to carry out the interceptions was not proven. In other words, there was no evidence that these espionages were illegal.

In the same vein, the prosecutor's office according to the judges - did not even prove that there were interceptions of the communications, nor did it  properly accredit the use of spy equipment, specifically the so-called Pegasus system .

The ruling indicated that there is no record that the messages intercepted to the victims (and that they recognized in different judicial proceedings and before the court) in fact come from Pegasus. Nor was the financial involvement of the State with respect to the loss of the Pegasus equipment substantiated through an audit, nor was an inventory of the assets stolen from  the National Security Council  (CSN) presented, which supports the accusation of the crimes of peculation.