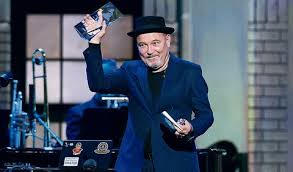 AFP – Las Vegas.  The stars of Latin music paid tribute on Wednesday night in Las Vegas to the Panamanian salsa singer Rubén Blades , awarded as Person of the Year at the 22nd edition of the Latin Grammy Awards.

Rubén Blades, Boza and Sech are among the nominees for the Latin Grammy 2021

The tribute was held on the eve of the delivery of the golden gramophones on Thursday, when the largest American festival of music in Spanish and Portuguese returns to its face-to-face format after the impasse of the pandemic.

“Here I am most of all to thank, nothing else. I would not be here if it had not been for many people who helped me to be here, "said Blades arriving on the red carpet this Wednesday.

"Rubén Blades stands out as a salsa Beatle," Argentine Andrés Calamaro said on the red carpet. " He is a chronicler-poet of reality, " added the singer who confessed to being excited to participate in the tribute singing Paula C . “Specifically, the album Siembra is the Sargeant Pepper [of the Beatles] of salsa. (...) We are talking about major words in music ”, commented the Flaca interpreter .

"It couldn't be better," said Colombian singer Carlos Vives when commenting on the invitation to participate in the gala singing Decisiones . "[Blades] is an important artist in the history of our music and what he has represented for several generations, including mine," said the interpreter of La Bicicleta .