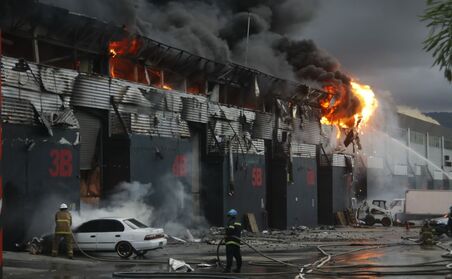 Units of The Panama Fire Department were called to a major fire in a warehouse complex in Mananitas lin 24 de Diciembre on Friday, afternoon June 7.

Firemen of the stations of Juan Diaz, Tocumen, San Miguelito, Balboa, Plaza Amador, Chepo and Calidonia were called I as the flames engulfed seven of the ten warehouses, with massive clouds of black toxic  smoke shrouding the scene

The powerful flames could be seen from Metro Line 2 while people living near the warehouses were evacuated. The Fire Department, director Colonel Jaime Villar, reported that  at least eight  vehicles are fighting the fire

"There is a lot of combustible material ..which has produced toxic smoke and flames of great magnitude," said Villar.