Protests grow over rule by decree 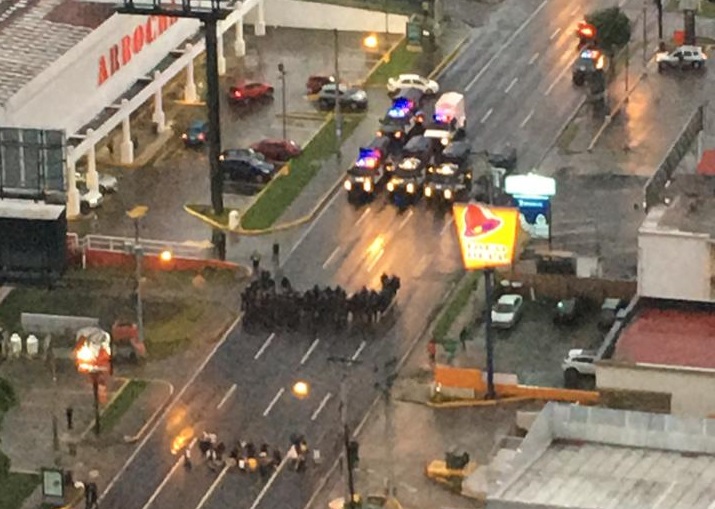 The arrest of young people who partially closed Calle 50  on Thursday, August 13  not only represented indications of the disproportionate use of force by the National Police but also put at the center of the debate the loss of a series of fundamental guarantees protected in the Constitution, such as the right to circulate reports La Prensa.

This is one of the rights that, according to various lawsuits and legal remedies presented before the Supreme Court, has been violated by the decrees promoted by the Executive Branch during the pandemic crisis.

Lawyers, through more than a dozen appeals, have asked the highest court to rule on the legality of the decrees signed by President Laurentino Cortizo, the authorities of the Ministry of Health and the Cabinet.

Apart from free movement, they argue that the rights to citizen freedom, work, assembly, and protest, have been curtailed.

With five months of strict confinement, more than 1,700 deaths in the country, contagions multiplying daily, and a depressed economy as a result of the closure of economic activities  there are those who insist that “you have rights to fight them ”.

Giulia De Sanctis, a lawyer who filed an unconstitutionality lawsuit against the Minsa Decree, which declared a curfew on June 11, warns that the objective of her lawsuit is not to question the quarantine. What she intends,  is to preserve the rule of law, since in her opinion, the procedure established by the Constitution was "completely ignored" by deciding that constitutional guarantees could be "lifted" indefinitely and without the control of the National Assembly.

“Obviously, freedom of movement is a fundamental guarantee of the human being. It is a guarantee recognized by the United Nations.”

Lawyer Raúl Molina says, rights have been violated by virtue of a decree issued by the Minsa. "This suspension of constitutional guarantees for a maximum of 10 days and if it is exceeded, it must be ratified by the Assembly.

Molina warns that the Calle 50 protest reflects the citizen unrest resulting from five months lockdown and with little results in the fight against the virus.

Ernesto Cedeño,  who presented two constitutional protections against quarantine decrees, said that the country "is governed by decrees" and the Court "does not want to do anything at all." "It is blind, deaf and mute."

One of the issues that arouse the most passions these days is the right to protest, a mechanism with which different groups claim from the government the passive role to face the pandemic. It has been the channel to show the discontent for the lack of accountability of the millions for the health crisis, the alleged corrupt practices, the irregularities in the allocation of aid from the Panama Solidarity plan

The United Nations Office for Human Rights has said on multiple occasions that the use of force in the repression of demonstrations is reserved for exceptional cases. It has also stated that any form of deprivation of liberty must be governed by the principles established in the international right.

If you want to see a country that successfully managed this issue look south to Urguay. At 3.5 million a very similar sized population to Panama, but to date only 1500+ cases and 40 deaths. No mandatory quarantines and only limited economic damage. https://www.bbc.com/mundo/noticias-52928601

I'm just wondering why it was only ten or so kids out there instead of the whole city?

I observe the numbers posted daily by the gov't and it is always 2.2 % better than the rest of the world. This is complete and utter B,S, with an attempt to make the people believe that this faulty plan is actually working, it is not, it is a lie. We managed to escape from Panama over a month ago to a place where life is near normal, the population is greater than Panama and the total deaths stand at 196. Cortizo and his handlers continue to mislead the public into believing that they are doing the right thing, well they are not, they are deceiving you and to what end. I would like to know who is really running the Country and what is the final goal?? Is it a complete Gov't takeover, communism? Is China behind this, is the WHO running the Country?? Panama is rapidly becoming a police state where all right are rapidly being removed. When you ask why they are doing this they insult the citizens by saying, they are like children, and must be treated like children, they just don't listen. It is time to face the truth, the plan is flawed and is not working, will never work. It is time to band together and stand up to this corrupt and incompetent Gov't.

How do you think Noriega got to power? Executive privilege above and beyond the law and the Constitution. When the judicial haha system refuses to adjudicate they are part of the problem. Panama has outsiders running the country and bribing the so called leaders. Why? Always money. You have one of the most corrupt politicians in the world and political systems. How do you think also rans come to power?

One of this Dictators ignoring and fighting human rights errecting concentrationcamps and killed people there was Adolf Hitler. Now we see the same is starting with "President" Cortizo. Next are the concentration camps in the woods of Panama. Adolf Cortizo must be removed now !