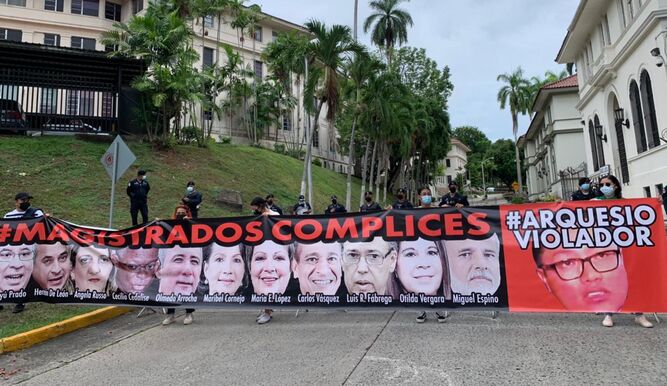 Protesters  gathered in front of the Supreme Court)  on  Saturday in opposition to the ruling that declared the deputy of the Democratic Revolutionary Party (PRD), Arquesio Arias, not guilty of charges of sexual abuse against two women.  A large banner, carrying  photographs of  the magistrates who   ruled in favor of the acquittal, labeled them “accomplices.” On the same poster, there was another message that read " Arquesio Violator ".

The Plenary of the Supreme Court of Justice, acting as the Oral Trial Court, declared Deputy Arquesio Arias not guilty for crimes against sexual freedom and integrity , after 8 hours of a deliberation, which concluded on Friday night April 16.

Arias, was accused of committing sexual crimes against two women, when he worked as a doctor at the Ustupu health center, in the Guna Yala region, in 2018.