Prosecution witness in Martinelli trial in fear after threats 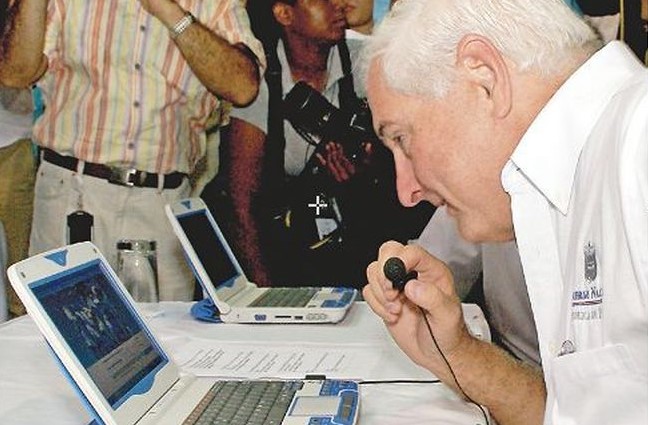 Agent Jubilo Graell filed a complaint on Friday night, June 24  night with the Public Prosecutor's Office (MP) for "fear" of his physical "security", after receiving chats and audios, allegedly from ex-workmates, while he was testifying.

Graell told the Primary Care Section of the MP, in the hands of prosecutor Azael Samaniego, that at noon on Friday he received two audios from the cell phone of Jaime Agrazal, an ex-CSN member, who reproached him for his testimony.

In addition,he said that he received a chat that he believes "was written by   Ronny Rodríguez ", ex-director of the CSN, in which he called him a liar and warned him about his testimony.

Rodriguez is a fugitive, wanted in the 16th Criminal Court  trial of  the former heads of the CSN Gustavo Pérez and Alejandro Garuz for the eavesdropping, and in which they were  both sentenced to 50 months in prison

"Being a witness on the part of the prosecution in the case of former President Martinelli, upon receiving these messages and audios  I fear for my safety," Graell said in the complaint.

In the trial of Garuz and Perez, Agrazal retracted his initial testimony of 2015, in which he confirmed that the CSN was spying, and said that he was pressured by the current head of the CSN, Rolando López, to say that.

False testimony
The Sixteenth Criminal Court has ordered an investigation of  Agrazal for the alleged commission of the crimes of simulation of a punishable act and false testimony.

Agrazal is among the witnesses who will be called by the defense.

Graell, who has worked since 2009 as a CSN  agent said in  court  that the deputy director  Ronny Rodriguez, made a daily report of the espionage work, which was delivered to the Presidency

Graell said that Rodriguez assigned him to  following specific targets, introducing herself in their lives and knowing in detail their activities, verifying their residences and even informing if they had lovers.

He explained that this information was given to Rodriguez and he sent it to "number 1", the nickname for Martinelli at the CSN.

Graell said that he joined the CSN in 2009 at the Public Order Department, where he was assigned to introduce himself in protests and demonstrations to report the participation of political activists and if money was paid to the participants or if they were given alcohol.

He  later went to the Intelligence Division, in which Rodriguez assigned her and together with  Jaime Agrazal, the surveillance of specific targets, among them, the now president Juan Carlos Varela - at that time vice president -, the journalist Castalia Pascual, the then leaders of the PRD Balbina Herrera and Mitchell Doens, the doctor Mauro Zúñiga, the environmentalist Raisa Banfield and the PRD deputy Leandro Ávila.

Intimidation
He said that in the case of Zúñiga he was entrusted with the task of letting the doctor know he was being followed, as a way to intimidate him.

"In the case of Varela,  his political meetings, the places where he had lunch, and his offices in Marbella were watched. Photos were taken and a "hot" report was sent to Rodríguez via WhatsApp, and that all the equipment used was from the CSN.

Graell said that shortly before the change of government, in 2014, Ronny Rodríguez ordered him to take a metal shelf from building 150, where the CSN operates in Quarry Heights, to the Presidency.

She said that she was covering a protest in Parque  Porras park when he received the call from Rodríguez, who told him that they were going to return “equipment  that had been lent to the council."

He testified that with Rodríguez and Javier Quirós he boarded a pick-up, they went to the Presidency and took out a metal shelf, and then they went to the headquarters of  Super 99 in Monte Oscuro. There, four security guards unloaded the equipment.

She recalled that Rodriguez did not have a good relationship with the then secretary of the CSN, Gustavo Pérez and that he even seemed to act independently.

Alejandro Garuz, who succeeded Perez as secretary of the CSN, “was a quiet man,” who had a goat they called Captain who even had a card in the facilities of the entity
Prosecutor Aurelio Vásquez stated that Graell's statement confirms that there was a fraud on the part of those responsible for the recording, surveillance, and monitoring of persons with State resources.

Vásquez recalled that, in accordance with the 2010  Executive Decree which created the CSN, the person in charge of the entity is the President of the Republic, who at the time was Ricardo Martinelli.

The hearing will resume on  Monday, May 27.