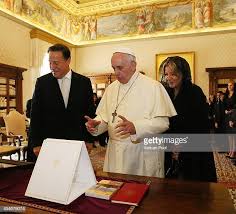 Panama looks like a failed state with little cause for optimism as it nears rock bottom said the country’s Chamber of Commerce, Industries and Agriculture (Cciap) in a report issued on Sunday, November 18.

As Panama’s president Juan Carlos Varela heads into the final months of his five-year term his legacy looks increasingly fragile with his attention more focused on China and the upcoming World Youth Day(WYD)  than the corruption crisis that has been condemned by all political parties, media, and Transparency International.

Varela. the  country's most traveled  leader,   hopes that the WYD for which  he and his wife lobbied  so assiduously in Rome, will help put Panama on the world stage, but , like the Panama Papers scandal the corruption in judicial and public institutions is putting renewed focus on  the darker side of a country still trying to escape from under the shadow of its former image as a “Banana Republic”

There is a need to recover the  institutionality, of the country, says the Chamber  since "the lack of widespread credibility makes us look like a failed state, where there is no climate of seriousness.”

Democracy "requires transparent and independent institutions for its proper functioning" .

The Cciap reaction arises after the National Assembly is again questioned about the management of its funds and the rehiring of personnel that appeared in the 080 and 172 forms, without having justified the work done for the deputies of the various parties.

In addition, magistrates of the Supreme Court are accused  "once again", of alleged corruption and sale of judgments.

"The institutional deterioration that registers the country resists any optimistic forecast, at least in the immediate future " and "this crisis has hit bottom and does not allow us to continue looking for excuses".

Cciap members are concerned that the media "reveal facts that require in-depth investigations and we do not see real measures taken to resolve them. "

In its statement, the Chamber  members remind us  that,  earlier they presented their proposal of constitutional reforms,

And have "carried out conversations with the Legislative Organ to make the call to this discussion".

"It is of our consideration that the need to proceed with this debate and approval is imminent, respecting the objective of rescuing the administration of justice as the center of life in a democracy."

Meanwhile, President Varela is preparing to receive a visit from the Chinese president who is set to give him more time than he got from the  US State  Secretary.

Pana only survivor bed furvlast 10 years on corruption - now the new guys are getting hungry they will rape panama where ever they can - ex president and sons - hilkarious - even the corrupt odebrecht advised he have them all money . Corruption is in genes

PANAMA | National Assembly remake the Constitution? N.A. with the Cambio Democratico will not perfect the Constitution. N.A. will not go against themselves with their own corruption. N.A. will continue to devise ways to take public funds. N.A. will always try to stay in power against the Executive branch. Conclusion and summary: The government may have to be over thrown by the people. If the new presidency continues to allow the... National Assembly to act irresponsibly and incompetently with Panama's public funds into the next five years... Panama will need to over throw the government for a perfect Constitution.

I have posted for a few years on a Panama Veteran website, and a lot of the folks on that site thought I was always criticizing Panama. I once lived there, and for a very long time had it in my sites as the country where I would retire, but this is no longer the case. Everyone is swooned by all the nice pretty stuff Panama has invested in over the years after the Canal turnover, but no one is seeing this incessant need to take from the taxpayer. No one is seeing the mis-prioritization of public funds for pretty shiny things and not the hard infrastructure of the country. Why hasn't the city of Colon been turned around with food, jobs, and housing for everyone? Why can't the courts and law enforcement do anything about rampant crime? There can be no more than a couple hundred bad guys that's committing all the crime. Something has to happen here, and the influx of the Chinese influence, is not the answer.

"the darker side of a country still trying to escape from under the shadow of its former image as a “Banana Republic”" That about sums it up. Until the education system improves and the next generation understands and sees the wonderful opportunities it is missing by continuously installing the "good old boys" into the system, Panama will never live up to its potential. It is doing nothing to escape from the "darker side". Such a sad waste.

THE CONSITUTION IS THE PROBLEM. WRONG FOCUS.

PANAMA | Supreme Court Justices Long Corrupted As Norm 1. S.C.J. has done this for years with $100's thousands in pocket will not just stop. 2. S.C.J. are old and at this time only see money. 3. S.C.J. do not have time to look at all the details of a case, old, slow, sleepy, etc. 4. S.C.J. know they will not be replaced. 5. S.C.J. do not keep up with the laws and there is no one to answer to. 6. S.C.J. probably could not pass the bar exam. 7. S.C.J. probably want their cut beginning with the Martinelli administration. 8. S.C.J. knows Panama is slow to justice in any form with the elite authorities. 9. S.C.J. knows president Varela does nothing, they have nothing to worry about. 10. S.C.J. knows Panama will forget about it and sympathize with the old justices. 11. S.C.J. knows president Varela will may just replace with more corrupt judges. 12. S.C.J. knows their is more money where that came from. 13. S.C.J. know they can just reward themselves, they deserve it. 14. S.C.J. know they are the laws just like the National Assembly deputies. 15. S.C.J. know they can retire at any time, nothing to lose but money. Total summary conclusion: Panama Supreme Court Justice can be bought as a business deal... clandestine or not, what are you going to do about it, I'm the judge!