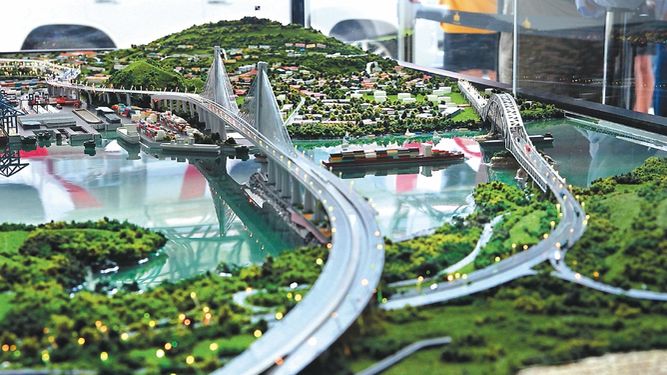 Panama’s Cabinet has given the go-ahead for the $1.4 billion fourth bridge over the Panama Canal, as  a  "turnkey" project that will not be finished until the end of the next government.

By declaring it a work of public interest, the State may grant the administration and operation to a subsidiary of the state-owned Empresa Nacional de Autopista (ENA), the current concessionaire of the North, South and East corridors reports La Prensa

What should be clear is that in addition to the fourth bridge, there is line 3 of the Metro and  the benefit that this measure provides is that the MOP does not consume all the payments through the budget, but we have an additional benefit [from tolls], "said  Erich Velásquez, vice minister of the MOP.

The fourth bridge will be cable-stayed with three lanes in each direction for vehicles and includes a space for line 3 of the Panama Metro, which will go from Albrook to Ciudad del Futuro, in Arraiján. The infrastructure seeks to expand the high capacity road network of the capital and its connections with the west side of the Canal, where it is estimated 1.7 million people will live.

In the document approved by the ministers, the MOP is authorized to perform the procedures for  contracting of the administrative concession for the operation, maintenance, and exploitation of the fourth bridge over the Canal to a subsidiary of ENA.”

Prior to a prequalification started in 2016, the MOP bid for the best value with separate evaluation by selecting the Panama Cuarto Puente consortium, composed of the Companies China Communications Construction Company and China Harbor Engineering Company LTD.

The contract includes the design, construction, and maintenance for five years by the consortium. However, it was established that the operation, exploitation and subsequent maintenance  concession will be given to a subsidiary company of ENA, "once the work is completed and can be operated safely." The construction will take around five years.

If they say "around five years", count on ten.