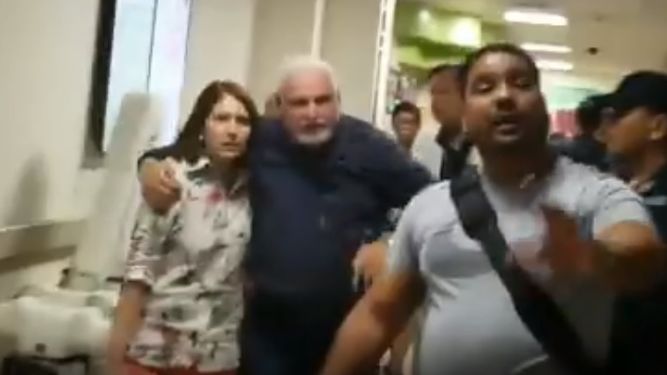 The health saga of Panama’s imprisoned former president, Ricardo Martinelli, has returned to the public domain overriding concerns of the escalating costs of the upcoming World Youth Day and the declining approval ratings of the current president  Juan Carlos Varela.

For a year in a Miami jail awaiting extradition to face justice for wiretapping political opponents journalists and businessmen, there were no reports of health problems although lawyers representing victims of his spying activities were falsely told he had t cancer.

But since his return and incarceration in El Renacer prison, he has made multiple “emergency”  trips to Hospital Santo Tomas, and after being assessed by a forensic medical team with the key diagnosis being hypertension, suffered by some 50 percent of the population.

On Thursday this week, Martinelli was taken to the private National Hospital for a  heart check-up, at the request of defense lawyers.

He arrived, as he frequently did during his preliminary court hearings, yelling accusations at his “persecutors”. The theme   was: “They are trying to kill me.”

At dawn on Friday, amid complaints from relatives, lawyers, and supporters, he was moved to Santo Tomas which handles the health problems of  ordinary  members  of the prison population

Agents of the National Police and the Penitentiary System arrived to make the transfer but  Martinelli, who was accompanied by his wife  Marta Linares de Martinelli and his lawyers, resisted.

"I'm not leaving," he shouted after getting up from the gurney on which he was being moved, but the prison team succeeded in taking the special patient back to the public domain.

The  General Directorate of the Penitentiary System reported that Martinelli "refused to carry out studies" in the National Hospital and they ordered his transfer to Santo Tomás Hospital.

"Once the corresponding exams have been completed, Martinelli Berrocal will be transferred again to the El Renacer Prison," said the statement.

"The Penitentiary System reports that in respect of the rights of all inmates, the necessary steps have been taken and reiterates that the request for the practice of medical examinations in a public health institution is being complied with," the statement said.

PANAMA | Martinelli: Business Man - The Lost Opportunity. Introductory Facts: Former President Martinelli...a business man and the scandals that followed. Panama public funds PAN was used by ex-president Martinelli for his own use. Martinelli used his aids to perform crimes and not charged as he evades justice. Martinelli tarnished his own record in the eye of the Panamanians as corrupt. Martinelli used wiretapping to perform crimes and not charged as he evades justice. Martinelli committed myriads of crimes, fled Panama, is now in El Renacer, prison. Panama National Assembly has been described as a rotten organ. Cambio Democratico Panama founded by Martinelli has abused public funds. C.D. Panama used forms 080 and others to public funds and is unaccounted. Panama General Comptroller has save $70 million and 5000 unnecessary hires. Ex-president Martinelli is vomiting with heart disease and wants to be Major? Major, to avoid further Panama prosecution. Ex-president Martinelli has taken $600 million / suitcase filled cash of public funds. Martinelli lawyers and judges declined Supreme Court case to lower court. Panama lower court attempted to cancel all charges but Supreme Court endorsed. ------------------------------------------------------------------------------------------------------------ Panama is undergoing tremendous disadvantages and a lost opportunity! Given the history of the 1989 Panama invasion and a Panama canal expansion... --- Panama Mossack Fonseca and the Panama Paper scandal. --- Panama has lost 50% hotel capacity and its tourism industry. --- Panama jobs growth has declined considerably and significantly. --- Panama continues to invest in major $billion projects with China. --- Panama may soon give concessions to China...Amador port. --- Panama may soon find 2000 Chinese installed cameras for their espionage. --- Panama National Assembly and China may soon want new headquarters. --- Panama / China diplomatic relationship may be at odds with the U.S. --- United States may soon add further import tariffs against China in 2019. --- The U.S. / International community are aligned against China. --- The U.S. has detained Chinese hackers and Meng Wanzshou in Canada. --- China continues to steal U.S. / International Intellectual Property. --- China continues to use I.P. against the United States. --- Panama President Varela is frequently on trips abroad. Panama Lost Opportunity --- Martinelli the business man was a disgrace for not using his talent. --- Martinelli business corruption significantly harmed the state. --- Martinelli involved his sons in the corrupt Odebrecht scandal. --- Martinelli sons fled Panama and tried to flee again in their father's yacht. --- Martinelli sons are now detained in Florida, USA with an expired Visa. The Hillary Clinton Foundation - Pay for Play, Democratic National Committee --- Qatar plan was to establish a Qatar passenger airline in Panama. --- Qatar is a sponsor of terrorism. --- Qatar represents a Panama national security risk...Panama 911 attack! --- Qatar was sanction by the Middle East upon U.S. President Trump's visit. The U.S. Supreme Court gave president Trump the right to ban six terrorist Middle East nations from entering the United States. The U.S. Democratic Nancy Pelosi will take office in 2019 and... Hillary Clinton who heads the National Democratic Committee are attempting to derail everything president Trump has done to protect the U.S. from foreign invasion and the loss of its jobs and economy. Given all these facts... Panama's future is uncertain at best.