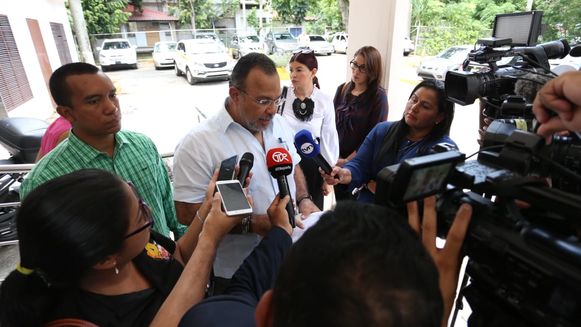 PANAMA’S former first lady Marta Linares de  Martinelli has s filed a claim "for family protection and the family image", in which she asks La Prensa to cease and refrain from disclosing and publishing facts or situations of a private nature, "As part of a media campaign" against her family.

The claim arises from reports in  La Prensa, which mention the link of her children with the Odebrecht case, under investigation by the Special Anticorruption Prosecutor's Office.

In the lawsuit, which was filed by lawyer Jamie Acosta, the attorney for the former first lady, the publications "have undermined the human dignity, honor and decorum" of the families Martinelli Berrocal, Martinelli Linares and Linares Brin de Martinelli, and are infringing on the articles 577 and 578 of the Family and Minors Code reports La Prensa.

The lawsuit seeks to "order print media,  television, radio and social networks, and especially La Prensa,  to cease and abstain from disclosing  or publishing  facts and situations of a private and family nature, and the first and last name or general surnames of the family group, as part of a media campaign against members of this Panamanian family. "

All answered questions as witnesses of the process and stated that the notes were based on reports of the judicial proceedings against members of the Martinelli Linares family.

Swiss probes
"We, in general, have responded that the reason why they are mentioned is because of the investigations carried out by local and Swiss authorities, Brazil and other countries. That is the reason for the mention of these people in the news, "said Rolando Rodriguez.

"The intention of this demand is for the media to refrain from mentioning the name of the Martinelli Linares family in cases that are carried out in the courts of justice ... It is absurd that the Martinelli family ask that this is not mentioned when it is already of public character p and its research is well known in other countries and here, "said Rodríguez. Neither the former first lady nor her lawyer attended the proceeding.

Isn't there a mistress in the mix?

Just sitting in a hospital recovering from some spinal surgery so I have plenty of time to contemplate my naval among other things LOL. The naming process is patently absurd in this day and age. You can't have a different method in this global system in which we are living today. It also contributes and fosters the class system that exists in all Latin countries and others as well. Although it seems absurd at first glance, a system requiring micro-chips be permanently installed at birth, (maybe a full name appended by the next number in line) which can be used to identify a person specifically. It would solve border problems, stolen IDs etc.. Radical? Perhaps. Functional at first glance. Invasion of privacy? Perhaps. Sometime you have give a little to get a lot. It would certainly have eliminated that problem you pose. This political correctness is slowly ruining the world in which we live.

You're right, as usual. Latinos are so into preserving their good name and yet so many have any conscience in doing bad things. Just don't let their (or their family's) bad deeds be exposed. In the old days, you were deterred from these acts so as not to cause shame to your family and, then, not now, it worked as a deterrent. And when it didn't, the family hung their heads. I can see the need for the media to name a suspect as "a person of interest" up until they are convicted and withhold that the person is a real suspect, but a name is necessary so we can know that the law is working. In Cista Rica, every Rico actively uses 2 last names and when a person is charged with a crime, conveniently only one last name is given out (eg. Man with last name of Gonzalez was arrested for theft. His surnames are Gonzalez Rivera; next crime, he identifies as Rivera. Each surname could individually apply to thousands of Ticos, so the perpetrator gets cover under the system). Might as well not bother to name him. Technically, the person Can assume 4 identities;. Gonzalez, Rivera, Gonzalez Rivera, or Rivera Gonzalez. But heaven forbid if you refuse to do business with Gonzalez Rivera because his criminal past is known.

Wow! Good luck with that one. The would be the straw that broke the proverbial camel's back. Without being able to mention names during a law suit, the printed version would be good for nothing but wrapping paper. It's not much better than that now.