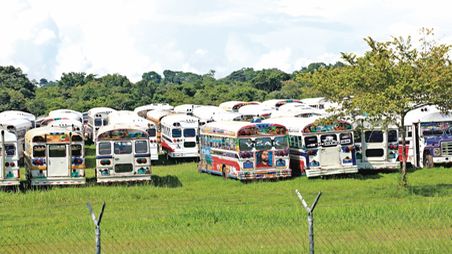 The devil's graveyard - a pot of gold

LAWMAKERS from Panama’s two main political parties are among 532  former owners of Panama’s discarded private buses known as Diablos Rojos (Red Devils)  who are charged with embezzlement in a multi-million dollar compensation scam when the aging, poorly serviced former US school buses were replaced with a newly purchased Metro bus fleet.

Named are Carlos Santana, of the ruling  Panameñista Party, and Diógenes Vergara and his deputy, Milciades Navarro, of the Democratic Revolutionary Party (PRD), and  Franz Wever, (PRD) current Secretary General of the National Assembly, also allegedly involved in the Pandeportes scam.

The accusations must be sent to the Supreme Court described as  “competent “ to investigate deputies.

The latest revelations of the plundering of the taxpayer-funded state treasury by elected officials follow the scandals of $400 million in electoral district scams,   millions in fraudulent contracts and payrolls and in the bottom of the barrel the disappeared millions through Pandeportes to non-existent sports leagues while performing athletes went unfunded.

The increasing scandals lend support to the Chamber of Commerce pronouncement that with its corrupt lawmakers and judges protecting each others backs  Panama is close to being a failed state.

Investigations of the Anticorruption Prosecutor's Office reveal that officials of the Transit  Authority (ATTT) acted in association with owners of concessions to manipulate the system.

The prosecution, led by  Kira Tascón , discovered that the bus routes removed from circulation were reassigned to other owners, to benefit from the compensation.

The  con, according to the investigations, was done in record time, so there was no way to verify the quotas, and once reassigned and transferred, with ATTT backing the door to collecting  compensation for closed routes  was open

The compensations were paid from 2010 and until 2014, as an economic compensation of the State, after approving a contract with the Mi Bus Company.

The prosecutor's office confirmed that there was alleged complicity between officials of the Legal Advice Department of the ATTT, who were aware of the irregularities in compensation.

Inquiries show that the IT Department of the ATTT has an excellent database, in which the history of a Certificate of Operation could be corroborated; however, the information was not verified by those in charge of the compensations.

Complicity presumably involved the Evaluation Technical Commission, the auditors of the Treasury and Finance and Accounting Department, who prepared the check without verifying the data.

It also indicates the alleged responsibility of the general director of the ATTT, who gave his guarantee for the payment; and the Comptroller General, which endorsed the payment.

Charged
Among those charged are, the ex-directors of the ATTT Jorge Ricardo Fábrega, Ventura Vega and Roberto Moreno; the ex-sub-director, Arturo Araúz; and the ex-director of the Unique Vehicle Registration Nicolás Brea.

The prosecution also accused Juan Pablo Mora, former Secretary of Goals of the Presidency in the last government, and about 10 auditors of the Comptroller's Office.

Other anomalies
The investigation shows is that buses were detected operating on non-existent routes and buses without air conditioning got $75.000. Most had expired insurance policies and others had no passenger insurance.

Buses with the mechanical damage that had not been functional for a long time, were admitted to the graveyard to get compensation.

in a country using a capitalist economic model, when an industry fails to read the trend of the government mandated future, compete and adjust for it, they're simply screwed. this model of using public monies to compensate for out of date equipment does not follow that model. with this as the standard, are dairy farmers also being compensated for the share of their market given to foreign competitors? are ANY other domestic businesses being compensated for losses due to government interference in their market? or has this whole debacle been powered simply by the fact that "LAWMAKERS from Panama’s two main political parties are among 532 former owners of Panama’s discarded private buses"? this appears to be yet another piece of a system where the rich and powerful steal from the poor.