Extradited Martinelli claims he returned to defend his name 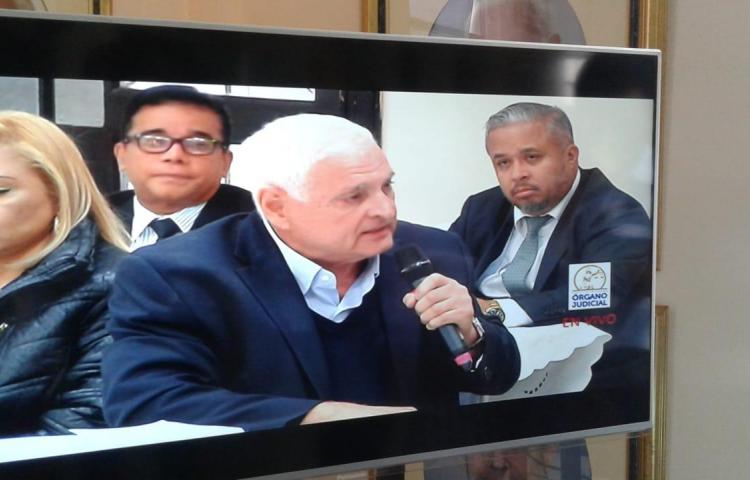 Ex-president Ricardo Martinelli, who lingered in a Miami detention center for over a year while a team of  US lawyers  fought his extradition to Panama to face trial for wiretapping told Panama Supreme  Court  judges on Monday,  September 10 that  he could have stayed in Miami, United States "all the time I wanted, but I preferred to return to my country to face this case, I came to defend my name and I will defend it with my life".

He was seeking bail for $250,000. a fraction of what he proffered to a US  judge who rejected his appeal because he was considered a flight risk.

"I have the right to be given bail for health reasons …it cannot be that there is one law for Martinelli and another for others,"  he said during his presentation at the hearing with the plenary of the Supreme Court.

He said  that he had nothing to do with the wiretapping  because he did not participate in the meetings of the Security Council, while he was president, at the same time he said that "anyone who has  wiretapped should  feel the full weight of the law”

Prosecutor Harry Diaz asked the court not to grant bail for the former president who  represents a risk of flight, “by sea, land, and air.”

Diaz also questioned the fact of Martinelli’s nominations to several positions in the 2019 election for 2019. "If his condition is so ‘serious’, why is he running for an elected office,?" he said.

You apparently have far more legal experience and knowledge of the law. As for me that is too far in the weeds LOL. I'll follow your lead and hopefully Panama will do the correct thing in the right amount of time. I just don't want to see that scumbag out on the streets.

Oh I am with you and I agree he is a flight risk. I have my opinion and it is not very good of Martinelli. However it is known that Martinelli is named in my Inter American Commision on Human Rights Petition P-32-17. What I am pointing out is that Panama is making it easy for Martinelli to hit Panama with Human Rights. The Inter American Commission on Human Rights places a benchmark of 3 years as to conclude a trial. as to ACHR, Admissibility Report No. 3/01, Case 11.760, Amilcar Menendez et al. (Argentina), 19 January 2001, paras. 43 et seq., available at http://cidh.org/annualrep/2000eng/ChapterIII/Admissible/Argentina11.670.htm. Another is the comment made by the Judge as to moral damages. The Judge made the comment that this case is about Martinelli, not the Republic of Panama. BIG NO-NO by the judge. Martinelli was an Organ of the State of the Republic of Panama....no doubt about that. And as such, Panama is therefore to be held accountable for his acts. However, Martinelli is not an Organ of the State 24-7-365. The issue is that Martinelli could ONLY have access to the act wiretapping as to being in a high position as an Organ of the State of Panama. Thereofre the judge CAN NOT make a statement that this is not about Panam when such a allegated illegal act was done by Martinelli when he was the President of Panama. However, if there is third party liability as to civil damages as to the law of Panama, then the claims can be implemented. By that comment by the judge he has made it clear that Matenilli is not able to have the right to a fair trial. A similar case was place in the American Court on Human Rights Tristán Donoso v. Panama. A very good case to look over. http://www.corteidh.or.cr/docs/casos/articulos/seriec_193_esp.pdf Attached is IACHR Petition P-32-17 in which Ex President Martinelli is named. https://uploads.disquscdn.com/images/16db88c46e5b6b27cfccebf61eae98d3cb9b8d88b45bb7b2d75bd394f45af98a.jpg

Why would anyone champion the cause of this corrupt individual. You say he is innocent until proven guilty and of course there is no denying that, however there is so much evidence stacked up against him that to allow him the freedom to roam and eventually leave the country would be foolhardy. What needs to happen is a quick trial and permanent placement in prison which will be the result. All these delays are nonsense but standard operating procedure not only in Panama but in other countries as well. Martinellis may very well die of old age before the trial is concluded.

This is nothing but a political circus and more and more the human rights violations are stacking up against the state of the Republic of Panama. As to the statement made by the prosecutor Diaz he as an organ of the state must not restrict article 4 of the constitution of Panama and as such Martinelli has not been found guilty and until he is found guilty Martinelli is presumed innocent. Therefore Prosecutor Diaz must respect, protect and fulfill the human rights of Martinelli and as such under the auspices of the American Convention on Human RIghts article 23. It is his right and if and when he is found guilty then the laws of Panama will apply. But until that time ........Martinelli has the right under article 4 of the constitution of Panama to participate in the government of the state of Panama.