Ex-president threatens he will denounce all 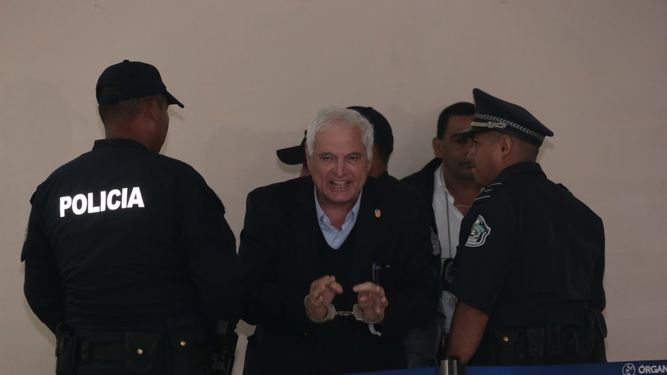 Martinelli shouted on the way in and out of court hearing

AN  ATTEMPT by the defense team of ex-president Ricardo Martinelli to present “in person” complaints in the National  Assembly earned  a  swift rejection  from the judge of guarantees, in the ex-president’s  wiretapping intermediate hearing on Wednesday, Aug. 29.

Martinelli entered and left the court with verbal outbursts aimed at media .

Responding to lawyer Alma Cortes  who asked  for  an authorization for Martinelli to be allowed to  make complaints against the magistrate Hernán De León and Attorney General Kenia Porcell , Judge Jerinimo Mejia said:  there was no legal authority that  allowed him to let a prisoner  out of El Renacer Penetentiary for such  a mission.

Martinelli's request included a permit to go "in person" to the National Assembly, to the Administrative Prosecutor’s Office and the Public Ministry to present  a lawsuit against the interim president of the Supreme Court Hernán De León and Prosecutor Porcell related to   a conversation  between them that was revealed by Popcell

When he left the court to return to el Renacer , Martinelli shouted that they did not let him denounce anyone, but that he will "denounce them all".

Earlier Carlos Carrillo, the only defense lawyer  with access to the seven booklets containing recordings and transcripts  of wiretappings  claimed that  several of the  recordings  in the were "illicitnt" and he  alleged lack of chain of custody of equipment or devices storage of the information of the alleged eavesdropping ordered by Martinelli. "The chain of custody was omitted, I think, because of the illegality of the test," said  Carrillo.

The defender claimed that in many cases  relationship "between what is there and the signs  of proof  against Martinelli…. Do not exist”

"The evidence invoked does not correspond to the material examined in the seven booklets, "Carrillo said. "the way in which they were collected is illegal  and irrelevant because procedural principles have been violated. "

Judge Mejia adjourned the hearing until September 18, when prosecutor Harry Diaz will respond to the defense comments.

Verified! People traveling to USA as Panama Bilingual Progam went to party instead of going to learn English. Now they have a job at president bilingual call center

there has been questioning as to where the eavesdropping equipment actually is. if it has not been stored and guarded as evidence, and protected from tampering, whether we like it or not, Martinelli has a point. if the chain of evidence has ever been broken, then it is corrupt and cannot be accepted as proof of anything. considering the laxity of the system, the ignorance of procedure, the disregard for protocol, and the corruption that supports it all, we should not be surprised. you don't have to pull many threads before finding a place where the fabric of justice begins to unravel, in Panama.

This is incorrect. The man has two soles, one on each foot. But that he has no soul is true.

The man is a fat greedy corrupt animal - no sole . He will rot in hell . Where's the sons let's see them still laugh at panama when they are arrested

PANAMA | MARTINELLI DOES NOT LOOK WELL, INSANE IN FACT. Martinelli aggressive nature and disrespect for authority has been demonstrated. Martinelli lawsuit against the vice president of Panama is a derangement. Martinelli extortion against a foreign leader in Italy knows no bound. Martinelli reading a book in court during the proceeding is out of touch with reality. Martinelli threatens witnesses and now denounces all is a tormented man. Martinelli wiretaps of 150 professional people is nothing more than play things. Martinelli battery of lawyers is a defense 24 - 7 and war...24 hours non stop. Martinelli willingness to use all his resources including Panama funds is irrational. Martinelli (The boss) was solely motivated by contract commissions, bribes, kickbacks, extortions, threats, lawsuits and power to demand his accomplices to bring him a suit case filled with cash. Martinelli's accomplice requested the banks know the boss requested the money. Martinelli wiretap and 10 additional crimes and the first indictment investigation has not even begun, centered on the defense own defense with delay proceedings. Martinelli infectious raging maniac will undoubtedly influence his Cambio Democratico party...beware Panama... MARTINELLI WANTS IT ALL!!! … MORE PACTS WITH SWORN BLOOD.