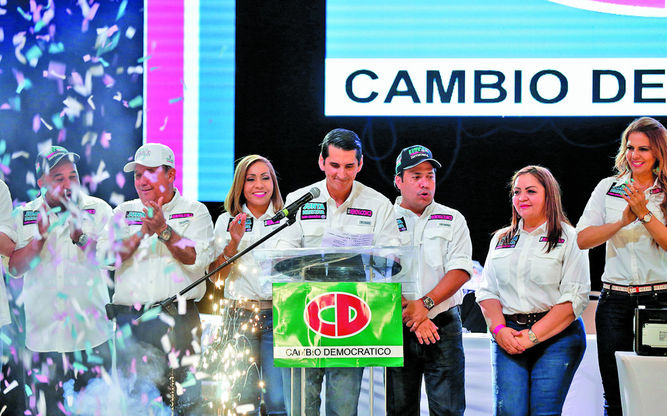 FORMER high flying Members of the Democratic Change (CD) Party now facing criminal trials are once again evading the call to justice, through a bizarre Panamanian law that says if they are running for office they have temporary immunity from prosecution.

Some of those currently “seeking office ”like the sons of ex-president Ricardo Martinelli, have already fled the country.

The criminal suspects’ earlier avoidance expired on February 20, after the election of the party’s board of directors.

The prerogative has been reactivated by the call for internal elections to choose district boards, which will be made every weekend from March 10 to June 3.

The Electoral Code establishes that the electoral criminal jurisdiction is in force when the applications are final and up to 15 days after the Electoral Tribunal (TE) proclaims the winners.

To advance the investigations, the MP must request the TE to rescind the immunity.

The current board of directors of CD, directed by Rómulo Roux, is composed of 15 members, mostly deputies of the National Assembly reports La Prensa.

In the list of candidates for the districtboards are former Finance Minister  Frank De Lima, for the post of undersecretary in the city of Panam, Francolini aspires to a vice-presidency; Jamie Ford, ex- Minister of Public Works will run for Undersecretary of Finance, and Luis Enrique Martinelli Linares seeks to be a director

In  West Panama  former of Public Works Minister Federico José Pepe Suárez, is running for  for Secretary General and in Veraguas, Ricardo Alberto Martinelli Linares -also  a son of the ex-ruler is running.

Ex- president Martinelli  does not appear. He is detained in Miami,  waiting to be extradited to face trial for interception of communications.

Criminal charges
De Lima has, at least, three pending criminal proceedings: one for concessions that he granted at the Tocumen airport, another for embezzlement in the parking at  the  terminal and one for bribes from Odebrecht.  He is in El Renacer prison.

Francolini is free on bail pending a hearing s related to alleged irregularities in a  multimillion dollar loan granted to  a  consortium, for the (failed) construction of the Amador convention center.  He  is also charged in  the Odebrecht bribes scandal  Ford and Suarez are being investigated for presumed embezzlement  in a $152.3 million highway  extension They  are also identified in the Odebrecht  investigation  along with The  Martinelli sons who are subjects of an Interpol red alert. Ricardo Martinelli Linares is also being investigated for alleged anomalies in the televised bingo contract Buko Millonario.

Giselle Burillo  ex-head of the Micro, Small and Medium Company  Authority also seeks a position on  the CD district boards Burillo is  on bail facing  two trials for alleged embezzlement.

The  CD called for the board of directors election and three times postponed it.  In the end, the elections took place on January 21, 2018 and Rómulo Roux defeated former President Martinelli. On each  occasion, the criminal suspects extended electoral criminal immunity .