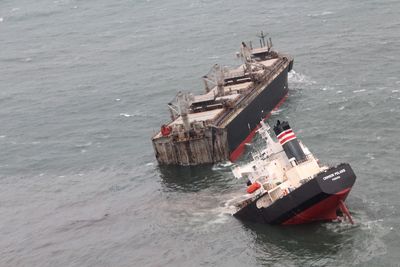 A Panama-flagged freighter stranded in the waters of a port of Aomori, in northern Japan, broke in two on Thursday, August 12, causing a spill of fuel into the sea, according to international news agencies.

The Crimson Polaris, a 39,910-ton cargo ship, ran aground on Wednesday four kilometers from the Japanese coast while sailing to the port of Hachinohe, in Aomori prefecture.

The freighter, which is operated by a Japanese company, was transporting wood from Thailand. It was to be refloated Thursday, but a section of the stern of the ship came off, splitting the ship in two and pouring fuel into the sea.

The two sides have not yet moved and continue to be monitored, the Japanese Coast Guard confirmed. According to the office, the spill would have spread about five kilometers away.

Meanwhile, the 21 crew members of the freighter, Chinese and Filipino nationals, were rescued by Japanese Coast Guard personnel. At the moment, no people have been reported injured.