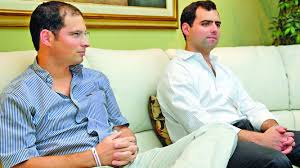 The fugitive sons of Ricardo Martinelli

PANAMA’S Public Ministry has made two requests to US  authorities for the extradition of the two sons of former president Ricardo Martinelli  who are each facing two investigations for alleged money laundering.

The Special Anticorruption Prosecutor, Zuleyka Moore, sent to the Panamanian Ministry of Foreign Affairs elements that had not been included in the original extradition request, related to the investigation related to bribes paid by the Brazilian construction company Odebrecht.

The additional information comes from the approval hearing of the collaboration agreements agreed by the Public Prosecutor's Office with Odebrecht executives André Rabello, Olivio Rodrigues Junior and Luiz Eduardo Da Rocha Soares, carried out by the Twelfth Criminal Court on November 9, 2017.

The information has been transcribed and translated and should be attached as a supplement to the extradition request, made to the United States on May 14, 2018.

Luis Enrique and Ricardo Alberto Martinelli Linares are awaiting a hearing before the immigration authorities of the United States.

Panama has issued two red alerts through Interpol so that they can be detained and extradited and face trial.

The other extraction process is in the hands of the Sixth Anti-Corruption Prosecutor's Office relating to the alleged payment of bribes by State contractors to government officials in exchange for contracts, known as the Blue Apple case.

The Public Prosecutor's Office has again also requested Interpol to issue red alerts for the capture and extradition of the brothers.

The sixth anti-corruption prosecutor, Aurelio Vásquez, is also awaiting s a response from the United States.

Ricardo Alberto Martinelli Linares is also facing embezzlement charges  dating back to 2016 over after supposed irregularities in the contract of televised bingo Buko Millonario.

The brothers were arrested on November 20, 2018 by the Immigration and Customs Enforcement Service (ICE) of the US Department of Homeland Security at their residence in Coral Gables, Miami.

ICE reported that the Martinelli Linares brothers entered the country legally, although "their visas were revoked in 2017 and since then they have been illegally in the United States."

In an audience held on December 4 last year of the same year, the were granted bail bonds of one million dollars each.

The last hearing convened was for January 22 at the Immigration Court in Miami, but was suspended due to the partial closure of the United States government.

Recently, the publication of photos by Ricardo Alberto Martinelli Linares at the Waterbar restaurant in San Francisco, United States, caused a stir on social networks.

Ricardo Alberto Martinelli Linares has a luxury apartment in Fremont Street, San Francisco, according to a report by Transparency International, based on data available from US public records