Over 500 bags of  aid food uncovered in raid 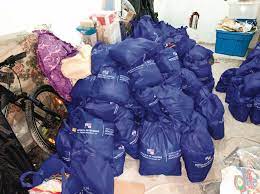 The raid followed a public complaint by the digital medium Foco Panamá . The Anti-Corruption Prosecutor's Office is conducting an ex officio investigation for the alleged commission of a crime against the public administration.

A source confirmed to La Prensa that the arrested person is Julio Caballero, a volunteer for the Panama Solidario program. It was reported that inside the house there were more than  500 bags with food and other frozen products, such as chickens.

Through a live broadcast and videos uploaded to their networks, the digital medium Foco Panama identified that bags of food were being brought into a private residence in San Francisco. They kept broadcasting for hours until the Police and Public Ministry (MP) personnel arrived.

In photos shared by the MP, it can be seen that the bags had the logo of the National Government and the Agricultural Marketing Institute.

The Panama Solidario Program, created as a response to social assistance at the beginning of the pandemic, and the Atlapa Convention Center as its center of operations. It was there that months ago, senior executive officers and hundreds of volunteers celebrated, with music and dance, the first anniversary  of the program. The event was widely criticized as photos of senior officials dancing together and flouting social distancing rules circulated on social media.

Vice President and Minister of the Presidency, José Gabriel Carrizo, was appointed by President Laurentino Cortizo to "lead the efforts."

According to a report published on June 9, the program has delivered nearly 9 million bags with food. The same report details that 6,508 people volunteer daily with Panama Solidario, and that, $259.4 million were committed to supply the bags with food delivered.