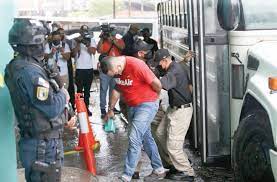 NEARLY 200  officials  working inside Panama’s  front-line  security systems have been arrested so far this year in operations against drug trafficking networks and money laundering, according to sources from the Security Ministry.

The detainees took advantage of their knowledge of the state apparatus and their contacts to evade controls in ports, customs and highways. They also had access to sensitive information.

In June, in Operation  Oasis, 25 people linked to a network to smuggle drugs along the coasts of Chepo and Darien were arrested. Those in charge of facilitating the movement of the cargo were policemen and members of the Public Ministry.

A second lieutenant of the National Police arrested last April, in the Neptune operation allegedly opened checkpoints, passed information and provided escort and security services to gang members of the Bagdag gang. A total of 20 people were arrested, some linked to the “Joyita massacre”, which left 13 dead on December 17, 2019.

In July, in the Master operation, another network dedicated to placing drugs in containers in Pacific ports and destined for Europe was dismantled. Among those detained were 16 dock workers and an official from the National Assembly.

Once the information was revealed the president of the Assembly, Crispiano Adames, announced his removal from office.

More recently, in the Fusion operation , a gang made of 27 people that operated at t Tocumen International Airport that sent drugs to the United States and Mexico was dismantled. Officials from the Police, the SPI, the Senan, the MP itself, and the Assembly were involved.

According to documents read at an impeachment hearing before a guarantee judge, the SPI and Senan agents were in charge of alerting about operations and the location of the anti-drug teams, while an MP official followed up on the criminal proceedings that were being opened.

The phenomenon of public servants implicated or accused in drug cases is not new, reports In fact, in September of last year, the governor of the Guna Yala region, Erick Iván Martelo, was arrested with 79 kilos of drugs in the vehicle in which he was traveling.

Giovanni Olmos, former assistant prosecutor of the MP, said that although this phenomenon is not new it seems to have been accentuated after the Covid-19 pandemic.

Recently, the Minister of Public Security, Juan Pino, referred to the issue of drug penetration in the ranks of the security forces. “You know that there are officials who get involved in organized crime and they have a very strict policy, you cannot leave, if you leave you are going to return in a coffin”, he said.

Recently fingers have been pointed  at members of the ruling PRD with close connections to people murdered by gangs.