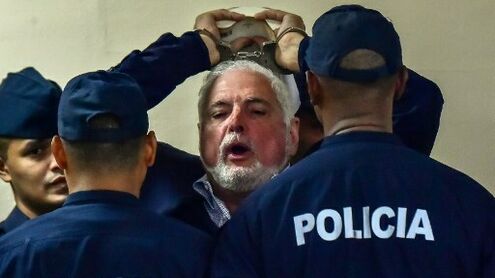 The trial of Former President  Ricardo Martinelli seems destined to become one of the longest in Panama’s history with two more delaying tactics  by the defense, including  a request  for a day off for Martinelli  each week  for alleged health concerns, while he is still actively trying  to run for Mayor of Panama in the May 5 elections.

Now an appeal of constitutional guarantees against the decision of the Court to allow the reading and introduction of part of the seven booklets containing confidential information of the victims of the wiretapping case.

The action is also against "other judicial proceedings" conducted by the expert Luis Rivera Calle, chief of Informatics of the Institute of Legal Medicine and Forensic Sciences (Imelcf) and a key prosecution witness.

Martinelli lawyer Carlos Carrillo, claims that the introduction of the booklets and other diligence on the part of Rivera Street," booklets do not have a relation with the expert, within the trial followed by Martinelli. " Therefore, Carrillo requests that said decision of the court be revoked.

According to the appeal   by Carrillo, in the order for opening the trial, it is stated that the booklets will be introduced as evidence, "by reading by Gustavo Adolfo Scott Valdés."

"The constitutional infraction occurred when introducing said evidence in a different way to how it was ordered in the order opening the trial," Carrillo said in the document.

The trial court is chaired by Judge Roberto Tejeira. Arlene Caballero (judge rapporteur) and Raúl Vergara (third judge). two of whom had close ties to the Martinelli administration.

Last week Organized Crime Prosecutors  Ricaurte González and  Aurelio Vásquez, who last week presented an appeal against the decision of Judge Tejeira to prevent the opening and comparison of the content of a compact disc compact with confidential information about the victims.

The material had already been admitted as evidence by Judge  Jerónimo Mejía, acting as judge of guarantees, during the intermediate phase of the process, when the case was under the jurisdiction of the Supreme Court.

The appeal is in the office of magistrate Carlos Trujillo.