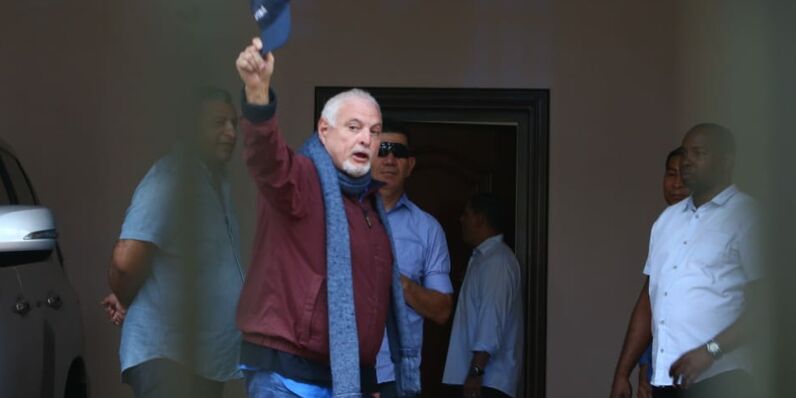 Former president Ricardo Martinelli returned to his home  under police escort  early Wednesday, June 12 instead  of to  El Renacer Prison where he  had been held since his extradition to Panama on June 11 last  year  to face trial for illegal wiretapping. which could  carry a sentence of  up to 21 years.

The decision was snnounced after an all night   wait while the three judges  overseeing his trial  debated his release.

After declaring that they were competent to deal with the request for a change of injunction, the judges  at 5 pm on Tuesday  announced that they would take a recess until 9:00 pm  However, the  decision was not announced until  5:00 am on Wednesday.

His release  from provisional detention includes several measures, including among them  house arrest;, cannot  leave the country; country, must deliver his passports (Panamanian and Italian); cannot approach or communicate with the victims; cannot comment on social networks or give  media interviews.

Martinelli ill be transferred by the National Police each time he goes to a hearing or has a medical appointment, which he must communicate in advance. his wife, Marta de Martinelli,  will be the guarantor of compliance with the measures.

It was a long night for the defendant, the defense, the prosecutors, the journalists who cover the  trial.

The judges will hear  appeals  by prosecutos against  his realease  and by the defense over the terms on Friday, at 10 a.m.