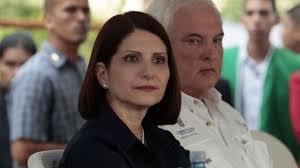 Marta Linares was when husband's bail appeal was rejected

WHILE  some of ex-president Ricardo Martinelli’ high-priced team of lawyers were in an appeals court facing yet another setback in their ongoing attempts to steer their client away from a trial with a potential lengthy jail term,  others were busy presenting a criminal complaint against Panama’s Attorney General Kenia Porcell.

They accuse her of the alleged commission of the crime of omission of public servant functions.

The appeal was filed by Roniel Ortiz based on the fact that on January 21, Porcell issued a resolution by designating which it designated the former assistant prosecutor Marcelino Aguilar as part of the team of prosecutors who will act in the process followed by Martinelli.

According to Ortiz, they had already denounced Aguilar for abuse of authority for allegedly manipulating evidence and coercing witnesses.

Bail denied
Meanwhile, the Superior Court of Appeals denied Martinelli ’s request for bail, overriding his impassioned arguments, including a statement that the day before he had received “extreme unction (last sacrament).

Magistrate Yiles Pitti, backed by her fellow judges Ruth Aizpú and Diego Fernández, in a unanimous decision, said it is a contradiction to assert serious ailments that endanger the life of the accused to obtain freedom and at the same time support the need to leave prison to carry out a political campaign. "It is a factor that he should have considered at the time of his application and that cannot serve to substantiate bail. She added that they did not have a  legal medical basis that would allow them to come to the conclusion about Martinelli's health conditions

Earlier,Alfredo Vallarino, lawyer of the ex-ruler,  argued that Judge Vargas  who had denied bail did not assess "in due form" the reports rendered by the doctors of Santo Tomas Hospital and of private doctors who revealed"serious health conditions" of his client who required specialized medical treatment, so needed to be transferred to his residence to receive care.

The judge rebutted the theory of the defense that Martinelli was being prevented from participating as a candidate for mayor of Panama, and deputy of the 8-8 circuit for the Democratic Change party (CD). "It is a factor [being imprisoned] that he should have considered at the time of being nominated," Pitti said.

The magistrate also said they had been informed by the prosecution in charge of the case and by the complainants, "that even when in detention, the accused had to be ordered to attend his hearings."  And at one time in El Renacer has assaulted a complainant during discussions.

Health stable
Prosecutor Delia De Castro argued that Martinelli's health condition remains stable and that it was verified by doctors from the Institute of Legal Medicine and Forensic Sciences. She said that he represents "a high risk of flight," as confirmed by the Supreme Court on September 10, 2018, when it denied a request for bail. She said reiterated that Martinelli has sufficient means and money to be absent from the process, and recalled that he was extradited to Panama.

Lawyers of the victims of wiretapping under Martinelli’s rule like the prosecutor spoke of flight risk and impairment of evidence.

Former first lady Marta Linares de Martinelli and CD deputy Sergio Gálvez were in the audience. Gálvez is Martinelli's running mate in his candidacy for mayor of Panama.

When it was his turn to speakMartinelli said,. "I asked for extreme unction and I want this process to continue if I die." He also promised that he would appear in the case of his release, "because I want to be president in the year 2024 and that's how it will be."