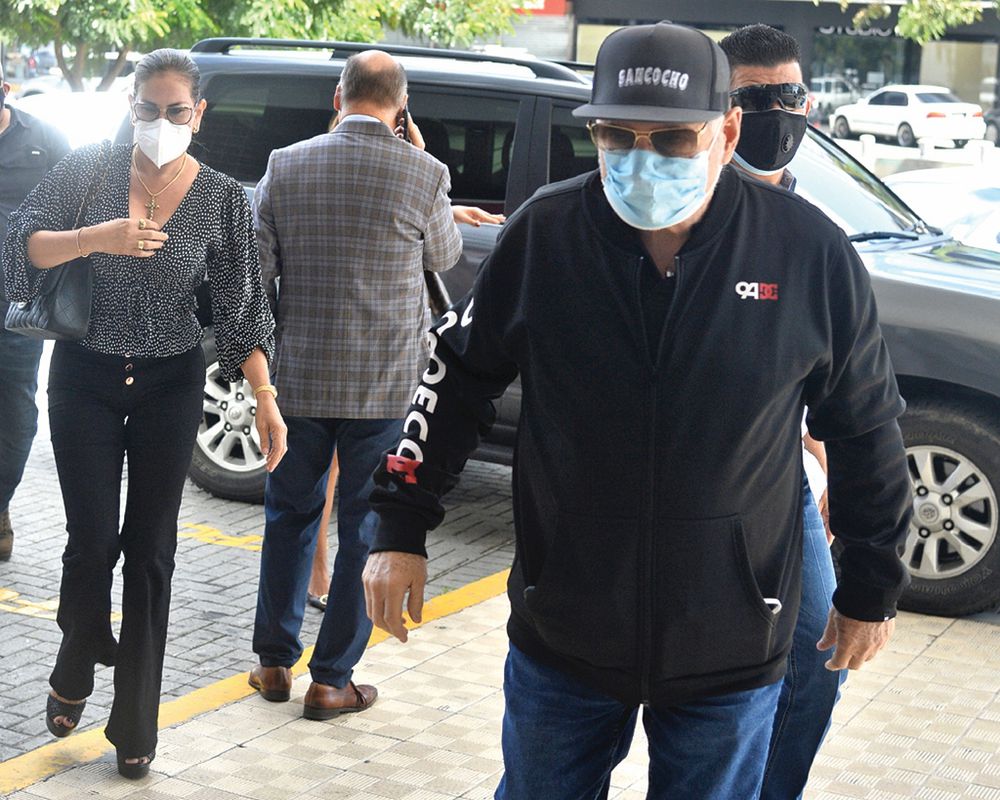 While the sons of ex-president Ricardo  Martinelli in Guatemala are fighting to avoid extradition to the US to face money laundering charges in an FBI Odebrecht bribery investigation that implicate  “a  high ranking person and  close family connection” during his reign (2009-2014) , he has filed at least six legal actions against anti-corruption prosecutor Tania Sterling, who is investigating him for his alleged participation in the same plot.

There   are  two criminal complaints against the Attorney General's Office in which he claims $10 million  for alleged "moral, psychological, commercial, business, social, family and political damage."

In the first, on July 2, attorney Shirley Castañeda alleges that Sterling issued an order of investigation on June 30, against Martinelli, for the alleged money laundering, when days before they had filed an unconstitutionality appeal before the Special Anti-Corruption Prosecutor's Office, using the specialty principle contemplated in the extradition treaty between the US  and Panama.

The second criminal complaint was filed on July 9 by a trio of Martinelli lawyers claiming that Sterling would have committed an abuse of authority and breach of the duties of public servants by ordering a forensic medical evaluation on July 10, which sought to determine whether or not Martinelli presents clinical signs of acute or chronic pathology. This, after on July 8, the former leader presented a medical disability certificate, of two days duration.

On July 10, a challenge against the prosecutor  was placed before the Twelfth Criminal Court, alleging that she "abuses her position by ignoring the medical incapacity of the former president."

Earlier, on July 2, Martinelli's defense presented before the same court another challenge against Sterling, on the grounds that the prosecutor had participated in evaluation with the team of lawyers of the American firm Foley Hoag as part of the Martinelli's extradition process from the United States, on June 11, 2018.

The challenges seek that judge Óscar Carrasquilla declare that there is an impediment for the prosecutor to continue to lead the investigations.

Martinelli has also gone to the Attorney General, Eduardo Ulloa, to filed a complaint against Sterling on July 9, 2020, for ordering the forensic evaluation.

Oher Demands
Other former officials of the justice system in the sights of  Martinelli are the former attorney general  Kenia Porcell and the two former magistrates of the Supreme Court who took part in his wiretapping probe: Harry Díaz, as prosecutor, and Jerónimo Mejía, as judge of guarantees

On July 9, the Judicial Branch ordered a seizure of property in the Porcell residence, as part of an investigation requested by Martinelli. She stopped that action by posting a bond of $150,000

Sterling has been a key player in the Odebrecht case, a file that has more than a thousand volumes and involves several characters who worked in the Martinelli administration says La Prensa.

Of the group of prosecutors who initially worked,  on the case only she and Ruth Morcillo remain, since Ulloa gave Zuleyka Moore other functions on May 25, alleging that he wanted the citizens and the legal community to understand that the work of the Public Ministry was done with objectivity.

Sources of the Public Ministry say the Martinelli actions will be processed but stressed that prosecutors have a legal and constitutional obligation to prosecute crime.

T his was the same argument given by the prosecutor Emeldo Márquez, who is investigating Martinelli in the New Business case, when on July 15 he decided to reject a letter from Martinelli's defense that alleged that he was protected by the principle of a specialty that, if applied, meant that the former president could only be investigated in Panama for wiretapping, for which he was extradited from the US. He was declared "not guilty". The sentence was appealed.

The US  has communicated to the Public Ministry that the principle, based on a 1904 bilateral treaty, is no longer applicable to Martinelli because he has traveled outside of Panama since September 2019.

Meanwhile, the shadow of his son's extradition to the US and the opening of the FBI files revealing names of their connections in in his administration still loom.

Perhaps---- if the various Press/News Agencies quit following every word, movement of the Martinelli Triumvirate, they would stop the nonsense. They just love seeing their pictures in the Media, hearing their names on radio/TV. Kind of like Trump --- if no one ran stories, aired interviews, paid attention to them all -- they would just shut up. No Notoriety, no nonsense.

Panama | U.S...Extradition of Martinelli Specific Crime Only Raped Panama. Panama was raped psychologically, immorally, with abuse of power by - LOCO - Martinelli! Facts: The Informal, Immoral Rape of Panama by former president - Ricardo Martinelli and Sons. 1. Martinelli abuse of state fund theft for purchase of Israeli spy equipment...Pegasus. - State funds theft...PAN for the welfare of the Panamanian citizens was and continues to be disregarded as a nuisance by the Panama elite government legal body...impotent! 2. Political and government figures and suppression of news media through illegal spy of its high caliber citizens demolishes the fabric of a free and moral society! 3. Political and government figures and news media reporting suppressed to discredit any and... ALL complaints with immediate lawsuits by Martinelli's battery of lawyers is an abject takeover as...HOSTAGE...of Panama's legal government process by one...LOCO...FAKERY MAN! 4. Martinelli's assures his lineage of diverse underground operations to leave options for... TOTAL CONTROL OF PANAMA AND ITS CITIZENS AND THEIR WELFARE! 5. Martinelli's total demonstration of brutal tactics against the representatives of Panama is CALLOUS WITHOUT MORAL CONSIDERATION ONLY SERVES HIS OWN PURPOSES! 6. Martinelli use of an incompetent mental health certificate allows Martinelli more options to control the legal system and it Panamanian citizens. 7. Martinelli demonstrates the...NERO...syndrome to burn Panama down to the ground. 8. Martinelli fled to the U.S. to provide...Israeli Pegasus spy information when the new U.S. president: Donald Trump was recently elected in power. 9. Martinelli continues to rape Panama and callously ploys to take away any private personal assets against his legal opponents beyond the scope of specific legal matters. 10. Martinelli is a destructive force for purposes of consolidating enormous... POWER TO DESTROY THE LAST VESTIGES OF A MORAL FABRIC SOCIETY! 11. Martinelli lawyer...specifically one was shot and killed in public daylight. 12. Martinelli may have been behind a missing investigator who was apparently a threat to him. 13. Martinelli use of ($1 - ? billion) of Panama state funds has made Panama an... INTERNATIONAL SECURITY RISK AT ALL LEVELS OF MONETARY DEVELOPMENTS! 14. Martinelli will not hesitate to...TAKE ALL OF PANAMA WITH HIM!!! 15. Martinelli...[NERO]...attorneys mental certificate is only an elite status document for... LEGAL DEFENSE PURPOSES ONLY! 16. The...United States... and International Community...must recognize... former president Ricardo Martinelli and Sons are capable of continued absolute and destruction of Panama with graver and graver gravities to the total economic decline and immoral legal court system that plays out with an underground crises of prison released inmate and their war weapons for...KILL!!! 17. Guatemala's Parlacen is responsible as an...ENABLER...for Martinelli's actions as... Guatemala's Parlacen demonstrates any Latin state will now have to join to balance and even the playing field for power, control and absolute...NERO...CORRUPTION! 18. Martinelli is an actor and business man who enjoys power from his power base and battery of lawyers border-word-only-legal jurisdiction to set new dangerous legal... precedents in the fragile cases pertaining to the chaotic legal fabric insured by...Martinelli!!! 19. Martinelli can claim anything, examples include... 10 things but not limited to Martinelli bag of Panama's destructive tools: - U.S. meddling and interference. - Political persecution. - Application of Specialty Principle. - Mental health status and stress. - Defamation and numerous lawsuits. - Elite status with Guatemala Parlacen...Impunities! - Elite status with title as former president of Panama. - Appeals and deliberate intentional delays to dismiss legal prosecution charges. - Muzzle the news media with lawsuits. - Lawsuits against the legal representative of Panama...essentially the rape of the legal system. 20. Panama's legal system will be strained with the prosperous... Martinelli clan and prosperous battery of lawyers extending to legal battery of lawyers at an international community level with no end in sight with the use of... Panama state funds!!!