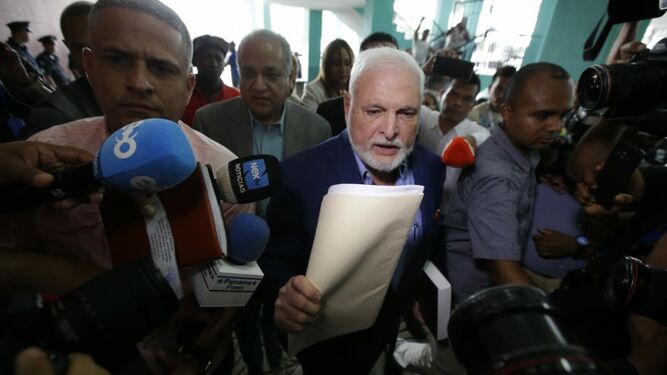 The Public Ministry failed to prove what,  when first initiated was believed to have been an open and shut case of illegal interception of communications of at least 150 political opponents, journalists, businessmen and lawyers by former president Ricardo Martinelli.

That was the conclusion of judges Roberto Tejeira, Raúl Vergara and Arlene Caballero, who formed the trial court, and on last August 9 resulted in a declaration of not guilty.

The sentence was read on the night of August 26.

Martinelli faced a sentence of up to 21 years in prison for the alleged commission of four crimes: the inviolability of secrecy and the right to privacy, and two forms of speculation (use and embezzlement). However, the judges considered that, with respect to the first two crimes, , there was no evidence that these wiretaps were illegal reports La Prensa.

For the same acts for which Martinelli was acquitted, Alejandro Garuz and Gustavo Pérez, both directors of the National Security Council in their government, were sentenced each to 80 months in prison.

The prosecutor's office - always according to the judges - did not even prove that there were interceptions of the communications, nor did it  properly accredit the use of spy equipment, specifically the so-called Pegasus system. Nor was the financial involvement of the State with respect to the loss of the Pegasus equipment substantiated through an audit, nor was an inventory of the assets stolen from the National Security Council  (CSN) presented, which supports the accusation of the crimes of peculation.

As for MLM Protection, this system - and its Circle program - is not part of the accused, as stated in the written sentence read by the judges.The reading of the 177-page  sentence - of 11 took four hours and 35 minutes.  In a "meticulous" way, each of the testimonial, expert and documentary evidence presented in the act of oral trial, which formally began last March 12, is detailed. according to the Judicial Branch.

"In the development of the trial, specifically at the beginning of the stage of probation evacuation, a series of incidents arose regarding some evidence," says the ruling.

Confidential info
For example, they refer to the seven booklets with confidential information of the victims of espionage, and whose access was declared confidential by the Supreme Court of. In the intermediate stage of the process, Judge Jerónimo Mejía - acting as judge of guarantees - authorized a member of the defense - Carlos Carrillo, coordinator of the Martinelli team of lawyers - to review the contents of the bookss. But according to  the Court Judges Tejeira, Caballero and Vergara, this decision by Mejía prevented the defense from preparing for the contradictory in the trial or practicing expert evidence.

They also mention Ishmael Pitti, alias "Brad", a former CSN agent assigned to espionage tasks and who at all times had been identified by the prosecution - and by the actors in the stages before the oral trial - as the protected witness No 843014. Pittí described "in a structured, chronological and on its own initiative", the events that occurred between 2011 and 2014 in building 150 of the CSN, such as the installation of  Pegasus and the follow-up of several objectives, according to him,on firect orders direct from Martinelli.

Pittí, told - among other things - that the team trained to operate Pegasus - acquired from the Israeli  NSO Group Technologies Ltd with funds from the former National Assistance Program (PAN) - was formed by him  and the agents Ronny Rodríguez (aka Didier) - also deputy director of the CSN - and William Pittí (aka Guillermo), both fugitives. Ismael Pittí told how they tapped the communications of leaders of the Suntracs, the PRD and the Panameñista, of the Association of Educators of Veraguenses ... "all of interest to the President of the Republic".

"From the information generated by the Pegasus system, a daily report was drawn up on the relevant facts that could shield or violate each target, and at the end of the day that documents were unified, printed and put in a yellow envelope, that Ronny Rodríguez delivered every morning to the President and he knows that, because many times Ronny told us that the envelope had to be delivered directly to the President; if the President was out of the country, Ronny did not carry any report; the work was done, accumulated until he returned, everything that had been collected in those days was printed and he took it personally, "said Ismael Pittí, according to an excerpt from his testimony collected in the ruling of the trial court.

He also said that, in May 2014, supposedly by order of Martinelli, they moved some equipment to the offices of Super 99 in Monte Oscuro.

The judges report that Pitti said that on July 28, 2014 he met with Commissioner Jacinto Cárdenas , first, and then President Juan Carlos Varela , later, to talk about an interception team that "they knew operated in building 150 of the National Security Council ".

"He first denied it, then acknowledged that he was an operator of the same and so they asked him to go before the corresponding authorities to report the incident," the ruling said. The judges wonder if Pittí was informed of "his constitutional right not to self-incriminate himself" and why Varela and Cárdenas did not present the complaint themselves. They also criticize that Pitti, in his first approach with the Assistant Prosecutor's Office, said he had information about the events that occurred in the CSN, and did not present himself as a witness to those facts.

After his complaint, Ismael Pittí was sent to be part of the permanent mission of Panama to the Organization of American States (OAS), based in Washington with a salary of $7,000.

All this - according to the court - makes him a "suspicious witness", which implies that his credibility has been affected, compromised, by virtue of strong grounds of bias and interest.

Regarding the digital evidence presented, the court considers that the Public Prosecutor's Office "had serious difficulties" in incorporating such evidence to trial, and notes that the expert witness Luis Rivera Calle , chief of Informatics of the Institute of Legal Medicine and Forensic Sciences (Imelcf), warned that the security seals on the compact discs were broken and that this worried him because some discs were "rewritable, that is, they could be added or removed information." Nor could he attest to the chain of custody.[, The ruling does not say that Rivera Calle subsequently recognized all the material contained in the records.]

another litany of incompetence

The underlings take the fall, while their boss skates free. Happens in the US, too. Nixon was pardoned, while underlings such as Gordon Liddy went to Club Fed.