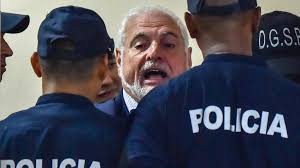 Lawsuits by former Panama resident Ricardo Martinelli, recently acquitted of massive wiretapping of opponents of all hues, are falling like black confetti in the justice system, while his team of lawyers continue to pad their wallets and court watchers await the results of appeals against the controversial decision by judges with ties to his administration.

His latest target is lawyer Rosendo Rivera, one of the victims of the illegal wiretapping, who faces a complaint for the alleged commission of the crime against honor.

The complaint was filed and admitted to the Primary Care Prosecutor's Office of Parque Lefevre.

To date billionaire  Martinelli, who has boasted that he has the power and the money and has long threatened “payback”  has filed some 20 lawsuits filed in civil and criminal jurisdictions against citizens, journalists, cartoonists, communicators, editors and executives of various media.

Panama | Ricardo Martinelli On The Loose! This is what I stated before, now... Panama has former president Martinelli on the loose. There was a lawsuit against the former Vise President of Panama. Martinelli lawsuits...lawsuits...20 lawsuits and battery of lawyers basically... Martinelli is suing the whole government of Panama. Martinelli is a madman and now you...Know!!! All those National Assembly deputy henchmen...follow the leader??? Martinelli...the Great Godfather out for [ALL] the money...will not stop! Martinelli is on the loose...just look at him trying to cover his misdeeds. Martinelli appointed judges and the National Assembly...look what you did to...PANAMA!!! Panama calls him...Loco...in English that is...Madman! Who will be your next dictator with ham elections. Panama appears to love...Loco men in politics. ...or... Is it the plan to shut down the news media for a dictatorship. Of course...here comes Ricardo Martinelli. Ricardo Martinelli a grocery business man. Venezuela president Maduro: A bus driver. The facts says it all no matter how you put it together. China and the $50 million Chinese restaurant...(espionage headquarter). Ricardo Martinelli... (Pegasus spy equipment). Venezuela president Maduro support from China...(starvation crises). Panama farmers cannot sell their milk and corn and the Panama social security crises (CSS). Panama lack of medicine crises. Panama ham festivities...$5 million??? Panama former president Ricardo Martinelli the...Loco billionaire!!!