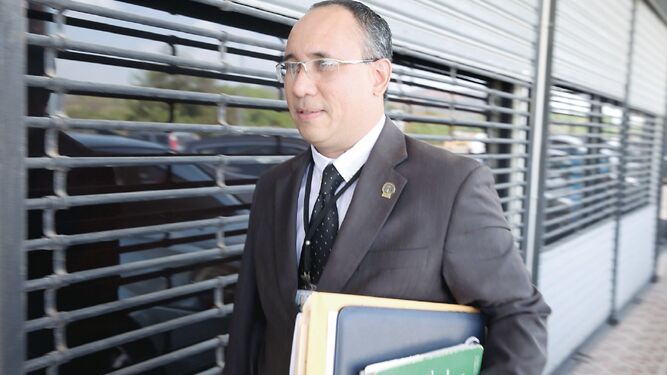 The judges in the wiretapping trial of former president Ricardo Martinell. (two with  close links to his administration are acting against an earlier ruling of the Supreme Court

Anticorruption prosecutor Aurelio Vásquez, a member of the  Public Ministry (MP) team made the statement on Friday, April 12i

The trial court is disregarding a decision of the  Supreme Court that last December validated the performance of Judge Jerónimo Mejía, who, acting as judge of guarantees, issued the order opening the trial of former with the corresponding evidence.

Vásquez reported that on  Monday Apl 15  three appeals will be filed against Judge Roberto Tejeira - president of the trial court - who, he alleges, prevents the presentation of evidence that was admitted in the intermediate phase of the proceeding against Martinelli.

In the ruling of December 7, 2018, with which the Supreme Court declined its jurisdiction, the plenary also validated everything that Mejía did.

The court "must respect the full content of the intermediate phase, which contains the evidence that would be used in the trial phase,." Said Vásquez

In a La Prensa interview, Vásquez said that the auto opening evidence, on page 31, contains seven booklets that include the ocular inspection to the email bradpty507@gmail.com, but now the court does not admit them as documentary evidence. That is to say, it will not value them at the moment of issuing its verdict.

Also, they are not allowed to open the compact discs in which the content of the mail was stored.

He stressed that the decision of Judge Roberto Tejeira, president of the court, limits the Public Ministry to present his theory of the case, since he can not compare the contents of the discs or analyze the documents with the transcription of its data.

The Criminal Code establishes that documentary evidence can be introduced for reading and that among these are the recognition, registration or inspection records made by the prosecution.

Tejeira also excluded the document # number 33: the official letter, in which are the telephone numbers intervened, and whose content was kept on compact discs.

Before the  Supreme Court declined its jurisdiction in the case to the ordinary sphere, Judge Harry Diaz, who acted as prosecutor of the case, requested his colleague, Judge José Ayú Prado, from the Criminal Chamber of the Court would certify if that judicial instance had ordered the interception of these telephones.

Vásquez  reiterated, the court is rejecting the decisions taken by Judge Mejía when he served as a trial judge.

He said that the court did not take into account the decision of the Court of December 7 2018, with which it declined its jurisdiction in the case, but validated everything that had been done up to that moment.

"In this case, the trial judges cannot ignore the Court's ruling, which is strict compliance," he said.

He added that the court must respect "the full content" of the intermediate phase, the stage in which is the evidence that would be used in the trial.

Therefore, he said, "a court order is being disregarded."