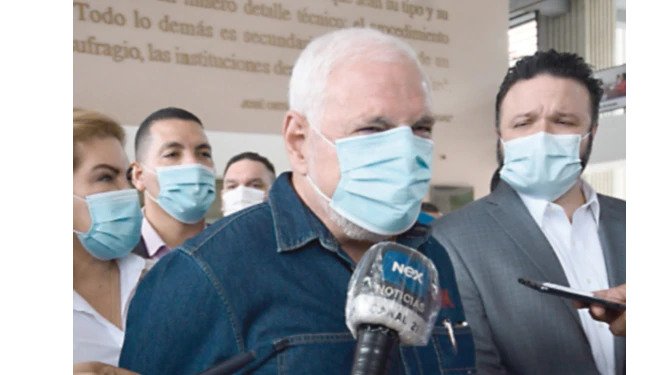 A criminal complaint by ex-president Ricardo Martinelli against a Panama newspaper has been denounced by lawyers and journalist associations as a direct attack on freedom of expression creating a disastrous precedent.

Alma Cortés, lawyer and Minister of Labor in the previous administration has filed a criminal complaint on behalf of Ricardo Martinelli against editors and directors of El Siglo over an article published in October last year.

The opinion piece was written by the former Secretary General of the Central General Autonomous Workers of Panama (CGTP), Mariano Mena, and published on October 3, 2018, titled “The tantrums of the crazy one (El Loco).” Mena is also named in the complaint

In the notification document, dated February 21, from the Metropolitan Prosecutor's Office, the president of the GESE group, Eduardo Quirós, and El Siglo editors: José Somarriba, Abdiel Quintero, Domayko Olivares, Millie Ramos, and Yasilka Córdoba are informed of their duty to appear in accordance with articles 152 and 154 of the Criminal Procedure Code.

The professor and lawyer, Miguel Antonio Bernal, said that these are the tricks that Mr. Martinelli has always used: "He who is a devoted enemy of freedom of expression and the right to information. It is a disgrace for this country that a former president has such an undemocratic behavior, he does this to maintain prominence.”

Bernal added that this quarrel has neither head  nor tailhead, because “'the one who wrote was Mariano Mena, he must denounce it is him, not the rest'.

Criminal lawyer, Carlos Herrera Morán, said that "it is wrong to sue a media and its directors, when the person, allegedly a victim, feels offended by an opinion article. In any case, they should sue the one who wrote. '

Morán who is also a lawyer for the victims in the illegal  wiretapping case said that Martinelli is' developing a strategy of intimidation towards journalists and the media and this has been increasing, as the oral trial against him  approaches

He warned that Mena is among the 150 Panamanians documented as alleged victims of wiretapping by Martinelli.

Mena  said “this demand should not have been accepted by the MP, The publication date was October 3 and they had up to 60 days, according to the Procedural Code to present their complaint, and the notification was filed February 21,

Mena said added that although he is among the defendants, he has not been notified by the MP, and said that “'nowhere in my article do I mention the name of that man”

Filemón Medina, of the Union of Journalists, pointed out that the complaint would not have a foothold if Mr. Martinelli is not mentioned, much less the action for the co-responsibility of the media. No person expressing his opinion should be subject to legal action, because that weakens the exercise of free expression, that is a right. Hopefully, those who administer justice understand this principle.”

Blanca Gómez, president of the National Association of Journalists (CONAPE), stressed that 'all the media place in their credit sections that opinion articles are the responsibility of the authors. This is because the medium provides that space for free opinion and expression, which has nothing to do with the opinion of the medium that is presented through its editorials, and the work of its staff journalists. It is absurd to pretend that the editors and the president of the media are sanctioned for an opinion article which the sole responsibility is its author. This action aims to set a disastrous precedent, given that the common citizen's right to have a space to express their position on topics of daily occurrence is curtailed.