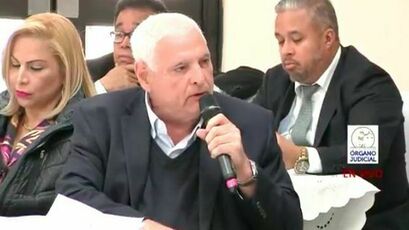 Ex-President Ricardo Martinelli has asked the Court hearing in his espionage case to eliminate the police guards with balaclavas when transferring him from his home to the Accusatory Penal System.

The request was made on Tuesday, July 2, before the hearing was suspended due to   Judge Arlene Caballero’s non-appearance due to family problems.

According to Martinelli, it is an exaggeration to have so many policemen and that they are hooded when they move him from his home to the trial court.

Highly dangerous
Nicomedes Castillo, prosecuting attorney, pointed out that the Trial Court is not competent to decide the number of police officers that should take care of Martinelli.

"We are not moving any accused, we are moving an ex-president of the Republic, who was delivered a year ago with documentation from the United States Marshall, saying he was a highly dangerous person," Castillo said.

He added that security measures for Martinelli are the responsibility of the National Police and not of the Court.