Martinelli and ex-boxer in virus-flouting video 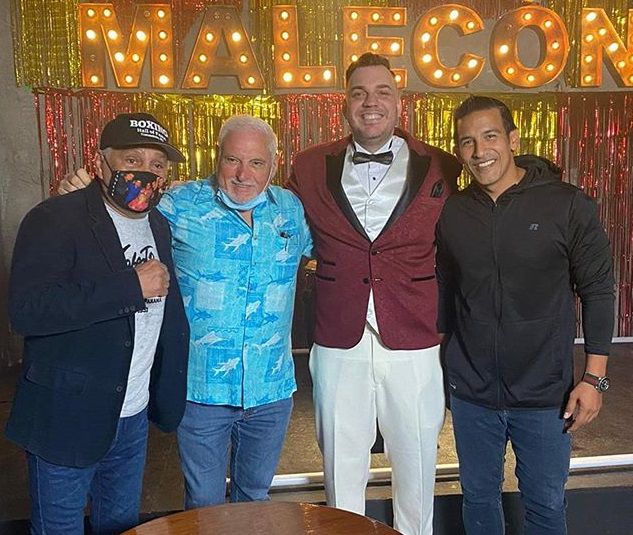 The Ministry of Health has opened an investigation into a  music video recording event attended by ex-president Ricardo Martinelli and former boxer Roberto  in San Felipe in the capital city after pictures  appeared on social networks on Tuesday, September 22,

According to The director of the Metropolitan Health Region, Israel Cedeño,  there is no record that the owner of the premises or the producer of the video (the instagramer Juan Pablo Barceló ) requested the permit required by the Ministry of Health (Minsa), in the midst of the sanitary measures imposed to prevent the spread of Covid-19.

In the photos and videos released, only Duran occasionally uses wore the mandatory mask, and the group also does not maintain the required distance of two meters, between each person.

Durán already had coronavirus and his $30,000 treatment was assumed by the Presidency.

"The owner of the premises is being summoned and we will also summon the producer and see where the non-compliance and the pertinent sanctions fit,” Cedeño said in Telemetro.

Cedeño was emphatic in pointing out that to carry out this type of activity, authorization must be obtained from the Minsa, similar to those that have already been issued in favor of various television channels, which carry out contests and other programs with the public.

He added that depending on what the owner of the premises says, they will proceed to summon the people who appear in the videos, and if there are sanctions, they will be imposed depending on the severity of the breach.

Barceló, in a video on his Instagram account, declared that "everyone had their mask", although that is not what can be seen in the images released by the protagonists themselves.

Despite the  widespread criticism he has received for the recording of his video called "Fuck Haters" , the instagramer Juan Pablo Barceló, said that whatever fine the authorities want to impose on him for this, it must be his person, because he was the one who organized everything.