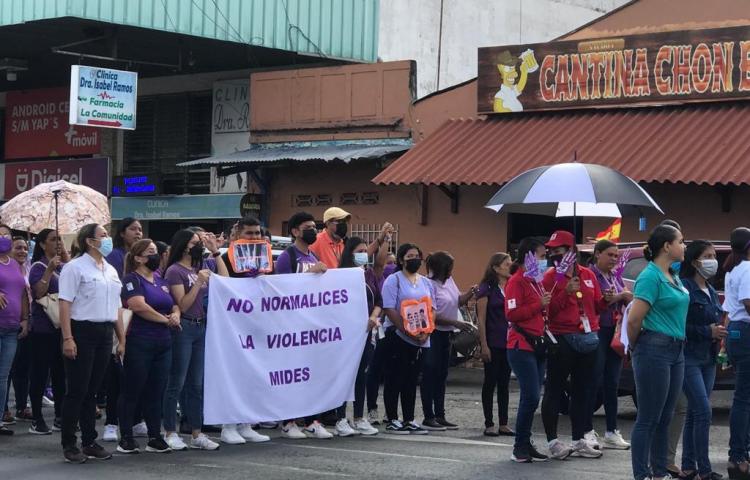 Chiriquí and Colón joined the marches on Friday to mark the International Day for the Elimination of Violence against Women. The two provinces together with Panama, lead the cases of femicide in the country.

In Chiriquí, where as of October 31, 4 femicides had been recorded, civil society together with students, teachers, and parents took to the streets to demand justice for these women.

The walk took place in Volcán, a corregimiento where two femicides have been registered so far this year, one of them being the murder of a minor under 17 years of age in recent days. People called for a stop to and an increase in sentences in these cases and took the opportunity to request a curfew to reduce violent acts in the community.

"We are asking for justice for the death of the student Maribel and the violence that exists in Tierras Altas, we want to stop this now and we need the help of the authorities," said Diana Sánchez, from the parents' club.

Meanwhile, Vielsie Hils, from the Volcano International Soroptimist Club, also joined the voices calling for punishment for those guilty of these crimes.

In Colón, where to date 4 femicides have been registered, the women marched calling for the reduction of acts of violence, throughout the country.

Eliza González, from the National Institute for Women (Inamu), stated that Colón does not escape the reality that hits women, emphasizing the deaths that have occurred in the province during the year

The Municipality of San Miguelito and the National Institute for Women held a walk that began on the premises of the General San Antonio Basic Educational Center and ended at the Los Andes shopping center.

Carrying purple balloons and holding banners that said "no more violence, no more blood, we want peace" they walked the streets of this district to raise awareness among the citizens.

In the district of La Chorrera, province of Panama Oeste, a group of people also came out to march to call for an end to violence against women.

A human chain was also carried out at the National Police headquarters in Ancón.

The Minister of Social Development, María Inés Castillo, said that there is no doubt that the best prevention strategy is to sanction any manifestation of violence against women, no matter how insignificant or naturalized it may seem.

The Archbishop of Panama, José Domingo Ulloa expressed "it is not enough that we raise our voices to defend the human rights of women, it is urgent and necessary that, in all stages of life, including educational centers, at work, in the churches and homes, let's prevent and work on respect for women".

Inamu has received 9,000 complaints of violence against women