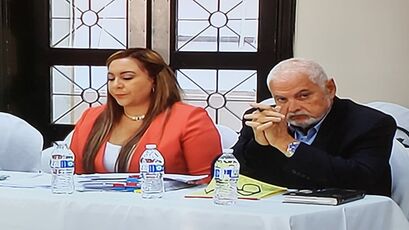 An attempt by Ricardo Martinelli, to suspend the transmission of the hearing of rights violations taking place on Thursday. February 28 was rejected by Judge Francisco Carpintero.

The hearing is in the case against the former president for the alleged commission of crimes against the inviolability of secrecy and the right to privacy, and two types of embezzlement.

Martinelli entered the courtroom shortly before 9:00 am, handcuffed and guarded. This time he entered in silence; there were no harangues or the usual shouting if statements to journalists report La Prensa.

Shortly after, Martinelli requested that the hearing be "private" and without the presence of the media.

Defense lawyer Carlos Carrillo requested the immediate suspension of the live transmission of the hearing as medical aspects of his client will be ventilated, which may affect "his physical integrity".

Prosecutor  Ricaurte González and David Cuevas, attorney for the plaintiff-victim  Rosendo Rivera, defended the publicity of the process.

"Since arriving in Panama, all [Martinelli's] trials have been public and oral ... Consequently, I do not see the need to prevent the media from broadcasting this act," said Cuevas. He recalled that previously, "the accused has said he would like to keep the publicity."

Carlos Herrera Delegado, lawyer of plaintiff victim  Mauro Zúñiga, said that Martinelli has not supported "in what way" the transmission of the event affects him.

Defense lawyer Jéssica Canto said the medical condition of her client and said he mentioned that she has not been subjected to legal medical evaluations since on June 12 and 13, 2018.

She read a certificates ion stating that Martinelli had a heart problems attack and brain complications that can cause sudden deathon from cardiologist Bey Lombana, which states that the patient has several diseases that require control.

Canto referred to the incidents that took place on December 20, when Martinelli's defense tried to move him to The National Hos[ital  for five days  to have several exams [Subsequenly he refused examinations at Santo Tomas Hospital and was returned to El Renacer Prison.]

The lawyer asked the judge to order a forensic medical evaluation of his client, to see if he could "resist" the oral trial that begins on March 12. The day before, Martinelli turns 67 years old. The request was turned down but the judge ordered the medical reports sent to the forensic team for evaluation.