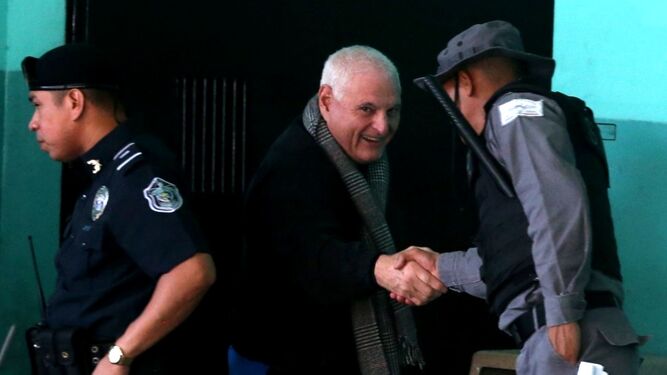 AFTER three, months and seven days of hearings in the espionage trial of former Panama president Ricardo Martinelli only 7 witnesses have been heard, with at least 120 to follow.

Tuesday’s hearing was enlivened by the presiding judge Judge Roberto Tejeira asking defense lawyer Sidney Sitton to be more professional after he asked for 45 minutes to cross-question a witness, and a few minutes later asked for an adjournment because of  Martinelli’s health. The judge had earlier slapped down requests by Martinelli, now under house arrest, to go for exercise walks and to leave the house to go to mass.

Martinelli had appeared at the court smiling and waving and shaking hands with a police escort.

He also acknowledged a telephone conversation he had with the indigenous leader Jaime Pedrol, about the closure of streets that several organizations maintained in the Ngäbe Buglé district, in opposition to the development of a mining project in that region.

Doens had already acknowledged a score of emails, cell phone messages, and transcripts of conversations corresponding to the years 2012 and 2013, which were extracted from the account brad.pty507@gmail.com, and which a  protected witness indicated to the judges that were material compiled by the CSN, following orders of the then president Martinelli.

In his testimony speech, Doens said that during a visit to El Renacer prison, Martinelli confessed that he had wiretapped him, but through a judicial order. The conversation with Martinelli was attended by the lawyer David Cuevas - who represents the victim and plaintiff Rosendo Rivera – so  Cuevas witnessed the confession.

Doens stated that on one occasion Gabriel Gaby Btesh, of  Martinelli's “circle zero” and now a fugitive proposed during a meeting held in the office of Alfredo Alemán the payment of  10,000  a month in exchange for "lowering the guard", that is, criticism against the Martinelli government and establish an electoral alliance against the "rabi-blancos. T

He said he had suspicions that it was followed through a GPS system, and as proof of this, in the raid on the house of former CSN secretary Gustavo Pérez, a USB was found with information about the tracking of the victim.

William Granados, of the prosecution team, said that Doens' story was detailed and shed light for the judges on the defendant's interest in knowing the political actions carried out by the PRD. and that the intercepted emails were not judicially authorized prosecuted, as Martinelli alleged.

Sidney Sitton said Doens could never link Martinelli to espionage. He indicated that in cross-examination, Doens said there was no record of Martinelli ordering espionage in the CSN.

He described Doens as a contaminated witness, after confirming that he had participated in the proceedings against former CSN directors  Gustavo Pérez and Alejandro Garuz , in which they were convicted of espionage and sentenced to 50 months in prison by the Sixteenth Criminal Court.

Judge Tejeira warned  Sitton, as defense lawyer, who asked in the first instance not to suspend the hearing, because he would cross-examine the witness quickly, but minutes later he said the opposite and requested to suspend the hearing, alleging Martinelli felt ill . The judge authorized 911 personnel to evaluate Martinelli, who resulted in high blood pressure. Martinelli has played the health card dozens of times since his extradition from the US and has been accused of refusing to take his medications.

Tejeira warned that he will adopt actions to prevent the trial from being delayed by petitions and actions that only seek to gain time.

The hearing will resume Thursday, with the conclusion of cross-examination to Mitchell Doens.

The prosecution has on the agenda 63 witnesses, . The plaintiffs have over  50 witnesses that they intend to take to the stand; while the defense plans a similar number reports La Prensa.

Did anyone else notice that Martinelli is looking at the camera, not the man whose hand he is shaking? Set up shot?