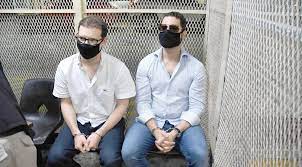 Ricardo Martinelli's sons will be sentenced on May 20 after pleading guilty to laundering $28 million.

Everything has its end and a process for money laundering is no exception writes Monica Palm in La Prensa.

On May 6, the New York prosecutor's office presented Judge Raymond Dearie with a note with strong assertions that support the sentence they suggested be applied to Ricardo Alberto and Luis Martinelli Linares, and a week later, the defense delivered a reply that, if Although it is a flowery literary effort -considering the circumstances of the accused-, it suggests that they are scratching the bottom of the pot of arguments.

For example, the defense tried to compare the sentence recommended by the prosecution with that applied to José Carlos Grubisich, former CEO of Braskem, the petrochemical subsidiary of Odebrecht involved in another aspect of the same mega bribery case.

For Grubisich, the prosecution requested last year 60 months in prison and Judge Dearie set the sentence at 20 months. This is not even a new issue: the prosecution had already explained why the realities of the former Braskem executive and the Martinelli Linares are different. Grubisich "personally did not receive or invest for himself the bribe money" and this contrasts with the yacht and the luxury condominium for personal gain to which they dedicated a significant part of the laundered funds who now present themselves as simple intermediaries.

It is noteworthy that, although the defenders have reiterated in recent weeks that the sentence should be equal to or close to the time they have been detained (23 months), on April 29 they sent a note to Judge Dearie asking that, if their clients have to serve additional time in prison, they are sent to a camp. According to the Bureau of Prisons, there are 122 federal prisons in the United States, divided into five levels of security. A camp has such a low level that it does not even reach low security: its perimeter fences are limited or non-existent and there are no traditional cells, only dormitories. Surveillance is poor and there is a relatively low staff to prisoner ratio. In other words, the severity of life in a camp is so light that it doesn't even seem like a penitentiary facility.

Taking into account that the agreement reached with the prosecution was approved by the judge, it would be correct to assume that he already knows the identity of the aforementioned close relative. Hopefully, soon they will reveal it publicly so that Panamanians - true victims of this corruption machine - at least receive some consolation prize.

Thus, perhaps, the matter does not stop there. It is not fair that a foreign country has investigated, extradited, prosecuted, and sentenced two Panamanians who were important players in the Odebrecht bribery scheme, while nothing has happened to them here.