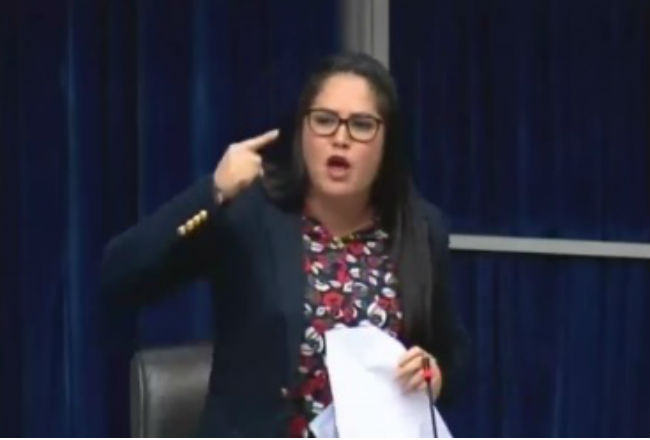 Security personnel were called to a room at the National Assembly on  Tuesday, October 22 as a meeting of deputies of the PRD party, seeking a consensus on issues related to the debate on revisions to the constitution span out of control with deputy Zulay Rodríguez, once again in the center of a shouting match.

Pulled by certain sectors of society and repelled by others, Rodriguez has made xenophobic and homophobic rhetoric her hallmark and last week she also railed against the alleged homosexuality of two renowned Panamanian politicians.

"Thank God we are prohibiting the marriage of two men together because imagine a union between this Mr. Lombana and Federico Humbert, my God, I don't know how the country will look," she said during a parliamentary intervention.

A deputy since 2014 and first vice president of the National Assembly since July, it is not the first time that Rodríguez boasts a xenophobic speech and is in favor of tightening immigration rules.

In recent years, the deputy has presented a series of controversial projects, which usually don’t thrive like such radical measures as deporting foreigners who insult or displace Panamanians at work and force radio stations to prioritize local music.

For the Professor of International Relations at Florida State University in Panama, Carlos Guevara-Mann, Rodriguez's "racist and unconstitutional" speech is especially/

'paradoxical', given that her mother's family comes from China and she herself would not have Panamanian nationality with the laws proposed."

"It seems incredible that a country like this one where so many cultures have lived together, speeches like this are accepted, even if it is by  a small group of the population," said Annette Planells, spokeswoman for the Independent Movement (Movin),

Panama, with just 4 million inhabitants, has in recent years been one of the most chosen destinations for many migrants, mainly Venezuelans, due to its economic strength and socio-political stability, but it is not saturated like other nations from the region, such as Colombia or Peru.

Between 2010 and 2018, the Panamanian authorities approved 150,000 residence permits for foreigners, according to official data.

Rodriguez , who was presented last year to the primaries to compete for the presidential nomination of the progressive Democratic Revolutionary Party (PRD), has endorsed the slogan "Panama for Panamanians" and has a special feeling for the Venezuelan community, which she  accuses of not paying taxes and unfair competition for collecting less salary than a Panamanian for the same job.

In July she accused Venezuelan children of "hitting" and "harassing" hr son at school, an incident that the school itself had to deny.

"My son is an innocent being and is an angel. (Venezuelans) come to our country to run over us, humiliate us, denigrate us and spit on us. But  they didn't have the courage to fight in their country,

Experts consulted by Efe say that Rodríguez complies perfectly with "the manual of the populist politician" and that she uses "half-truths" to elaborate her own stories.

"As populist leaders do in other parts of the world, it appeals to the most primitive feelings of the human being to build political capital in the grossest way,"  Professor  Guevara-Mann, told Efe.

"She has managed to identify certain fears in the population and there are people who feel that it is the only policy that can defend them," said Movin’  spokeswoman, who wonders why her party does not disavow her more frequently
zulay-rodriguez hompphobia xenophobia
Share
Previous Post
Columbian pop singer Shakira facing tax fraud trial
Next Post
A look back at the 13-day Odebrecht hearing