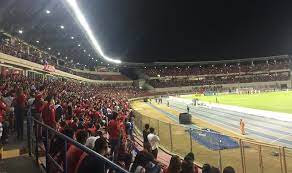 FIFA fines and sanctions Panama with a game behind closed doors for homophobic chants.

The FIFA sanctioned Panama with a match behind closed doors, ie without public for the misbehavior of fans during matches played locally in September, in the qualifying road to the World Cup 2022 Qatar.

The sanction of playing without an audience would become effective in the next international commitment of the Pansms team, which will be on Tuesday, November 16, against El Salvador, on the eighth date of the octagonal round of Concacaf.

The Panamanian Football Federation (Fepafut) confirmed that it was notified of the measure by the international body for "homophobic chants by fans during the September matches of the qualification for the Qatar 2022 World Cup played at home."

Fepafut reported that it will proceed to appeal the sanction issued by the FIFA Disciplinary Committee and that if an unfavorable response is received, the process of returning the tickets that have already been purchased for the match against El Salvador will begin.

Hey Butler, since you’re not woke, it’s ok to call you an asshole.

Whatever happened to 'sticks and stones..." and all that? wokeness is so lame