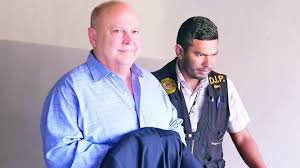 The businessman and former governor of Coclé, Richard Fifer, was sentenced to 10 years in prison for the crime of fraud against Gold Dragon Capital.

The first judge liquidator of criminal cases of the first judicial circuit of Panama, Agueda Renteria, also imposed the disqualification from the exercise of public functions for the same period once he has served the main sentence.

“It is clear that Petaquilla Minerales, SA, deceived Gold Dragon Capital Capital Management, LTD., Through the act executed by Messrs. Richard Fifer and Kenneth Morgan when initiating with their signatures the well-known purchase option contract, which as evidenced it contained false information regarding the ownership or title that that offering entity had regarding the concessions that are the object of that contract, ” says the November 15 ruling.

The process followed by Fifer began after a complaint filed by representatives of Gold Dragon Capital Management, who alleged that the company entered into a contract with Fifer to invest $100,000 in mining exploration work, in exchange for obtaining 2% of the shares. Petaquilla Mineral, Ltd. and the Rio Belencito concessions, zones 1 and 2, and Rio Petaquilla, zones 1, 2 and 3, an agreement that, according to them, was not fulfilled.