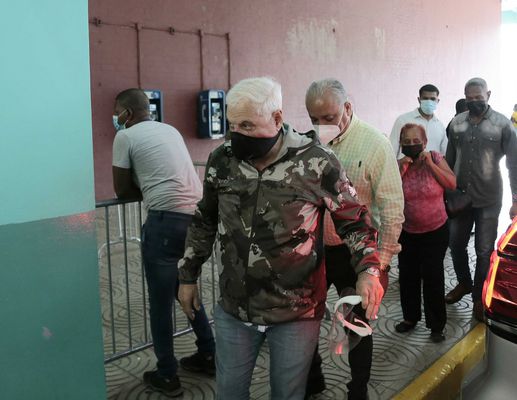 Stanley Motta and Aurelio Barría were the first victims to be called on Wednesday, October 6 in the trial of former President Ricardo Martinelli, for the alleged interception of communications and monitoring, persecution, and surveillance without judicial authorization.

The first to appear before was Barría, who acknowledged a personal email that he sent in 2013, in which he reflected on the electoral political landscape in the face of the May 2014 elections.

Barría stated that this email was addressed only to a friend, who was in Colombia. He denied that his electronic communications were hacked, that he had shared the password with anyone, or that his computer was accessible to anyone else.

The witness told the judges that he always suspected that Martinelli was spying on his communications and said that on one occasion, during a shareholders' meeting of Corporación La Prensa, Martinelli - who was then President – publicly acknowledged that he had the information and the “ pedigree ”of those who were present.

On another occasion, he was interviewed in the Knockout segment of the journalist Flor Mizrachi, from La Prensa, and shortly afterward Martinelli called him to tell him that he had already been identified as an opponent of his government and threatened to reveal matters of his private sphere.

Regarding the testimony given by Motta, the prosecutor Ricardo González said that the businessman recognized two of his emails, which he sent to executives of TVN Media , about the "escape" of a journalist to another television station, and another about the labeling of alcoholic beverages. which was imposed in the Martinelli government. Both emails were intercepted.

Carlos Herrera Delegado, attorney for the victim and plaintiff Mitchell Doens, considers that the most important thing is that those affected recognize the correspondence, audios, videos, and any other type of documentation stolen by agents of the National Security Council (CSN) , between the years 2012 to 2014.

He explained that beyond the details that the experts and technical personnel may provide, the victims are the only fully able to recognize the contents and thus be able to establish whether, in fact, they were intercepted by the CSN.

For these same events, Gustavo Pérez and Alejandro Garuz - both directors of the CSN in the Martinelli government - were sentenced to 60 months in prison. The conviction was appealed.