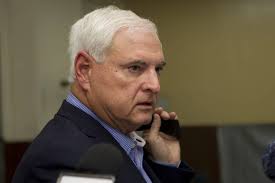 The  future of former president Ricardo Martinell is in the hands of three women in Panama’s Supreme Court who will rule on the appeals against the decision of the court that on  August 9, 2018, declared him no guilty of wiretapping political opponent. Journalists, businessmen and lawyers.

The prosecution had called for a 22-year jail term.

López Arias, who took office in December became president of the Chamber on January 2. She and Cornejo were appointed by the president of Laurentino Cortizo.

López Arias, Cornejo and Alonso must resolve an appeal for annulment with cassation filed by the specialized prosecutor against Organized Crime, Ricaurte González, and the complainant Rosendo Rivera.

In addition, the three must make in the appeal filed of the lawyer Carlos Herrera Morán, on behalf of the complainants Mauro Zúñiga, Mitchell Doens, and Balbina Herrara, against the verdict that declared Martinelli president not guilty.

Until December 31, 2019, the appeals were in the hands of Wilfredo Sáenz, who was the deputy of former magistrate HarryDiaz.  Cornejo replaced Diaz.

Cornejo, as a new rapporteur can (endorse the draft decision left by Sáenz (whose content is unknown says La Prensa), or write a new one.

If the appeals are finally admitted, an oral l hearing must be called, where the prosecutor and the complainants will present their case against the court ruling.