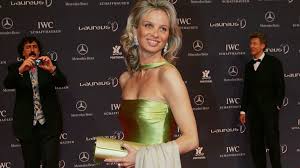 Danish-born businesswoman Corinna Larsen the former lover of  the Emeritus King Juan Carlos  of Spain bought  a $7.8 million mansion in the United Kingdom in 2015, through the Panama based  Lucum Foundation three years after receiving a $77 million gift from the king according to the  Swiss prosecutor's office which  is investigating the purchase

Larsen insists that the transfer million that the king allegedly made him from the account in Switzerland of the Lucum Foundation, based in Panama, was a gift for her sentimental relationship “in gratitude for having taken care of him during his worst moments” and for the esteem he had for her son.and attributes to a “tantrum” that the monarch asked for the return of that money years later,. “In 2014, he made desperate attempts to get me back with him,” said  the businesswoman in  a BBC interview last  Thursday.

Larsen is  under investigation for an alleged money laundering, and the chief prosecutor in Geneva is investigating this acquisition and the "opaque structure" she used for the operation, produced after receiving the gift from the former monarch,

The businesswoman is one of the three people investigated in Switzerland for a transfer of $100 million Juan Carlos received in 2008 from the then King Abdullah of Arabia.

The prosecution suspects that the money she received served to hide the remaining money he had received from the Saudi monarch.

Larsen and Juan Carlos I deny that she acted as a frontman.

Although the 82-year-old king emeritus is not formally investigated, the revelations about his fortune are being studied by the Spanish and Swiss justice and prompted him to leave the country on August 3 heading for  the United Arab Emirates.

From his elf-imposed exile and agreed with his heir Felipe VI, the king, who abdicated in 2014, assures that he will continue to be at the disposal of Spanish justice.

In the BBC interview  she describes as “extraordinary” that “40 years of the modus operandi of a family business”, in reference to the Royal House, ended up focusing on  her Panama link despite the fact that “there will be hundreds of accounts in other jurisdictions.”

“He realized that I was not coming back and was completely furious. He asked me to give him everything back. I think it was just a tantrum,” According to Larsen  Juan Carlos I  “has confirmed in the Swiss investigation that he never actually asked for the money back and that I never had the money in his name.”

The Swiss prosecutor believes that the 65 million euros that were transferred from the Lucum Foundation account to another of Corinna Larssen in 2012 came from the 100 million that Juan Carlos I received from a commission for the construction of the AVE to Mecca in 2008 .

King Juan Carlos I has been in the United Arab Emirates since August 3, according to the Royal Household in a statement after two weeks of silence.

Damn she's a high priced whore! Hiding her money in a Panama foundation was a natural decision since almost all ill gotten gains end up in Panama. The old saying goes... gringos in Panama are either "Wanted" or not wanted at all elsewhere. "Seedy" that's the word for Panama.