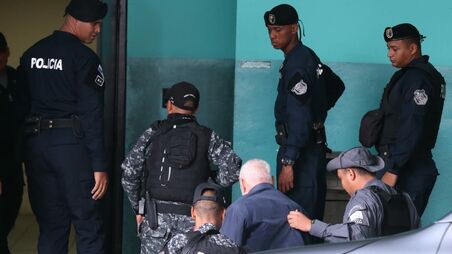 FOURTEEN files of documentary evidence presented by the Organized Crime  Prosecutor's Office were admitted by the three-judge panel in spite of defense objections at the Oral trial of ex-president Ricardo Martinelli on Monday,  March 25.

He is facing charges of illegal wiretapping and embezzlement.,

The trial will resume on Tuesday, March 26, at 9:00 am, at the offices of the Accusatory Criminal System in Plaza Ágora.

The Trial Court granted the defense attorneys and the complainants seven days to examine the case booklets.

The deadline for lawyers to examine the booklets begins after completing the presentation evacuation of all documentary evidence submitted by the Public Prosecutor's Office.

The files are based on ocular inspections made by the National Security Council and computer equipment related to the case.

"The analysis of the digital evidence by the Public Prosecutor's Office is wrong, everything was done badly", said Sidney Sitton, one of Martinelli's lawyers.

During the morning hearing, there was a recess to take Martinelli’s blood pressure.  A doctor from the Ministry of Health found that the pressure was stable.

Martinelli is currently in provisional detention in El Renacer prison  and arrived at the judicial facility as on previous occasions, under strong security measures.