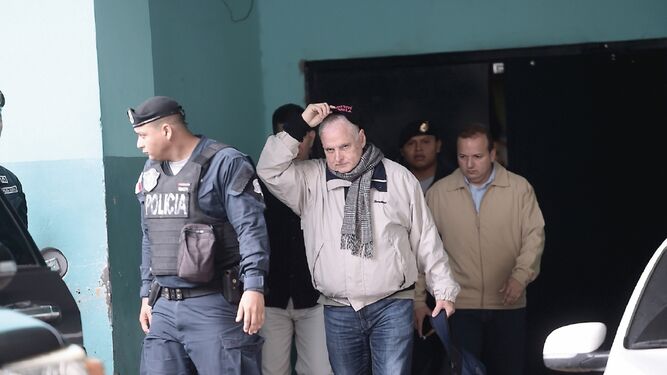 Lawyers of former president Ricardo Martinelli have made their first moves in helping him evade a string of criminal prosecutions, in addition to the one that enabled his extradition from the United States

Carlos Carrillo, of the  Martinelli team of invoked the principle of specialty before the Eighteenth Criminal Court and requested that his client be excluded from an investigation of the  Seventh Anti-Corruption Prosecutor's Office for the alleged commission of financial crimes.

Carrillo argued that a person who has been extradited to Panama cannot be prosecuted or detained by any other offense that is not contemplated in the extradition process.

He said that Martinelli cannot be prosecuted for any case other than the one followed for the alleged commission of crimes against the inviolability of secrecy and the right to privacy, and embezzlement, for which the United States extradited him to Panama on June 11, 2018.

The probe by the Seventh Anti-Corruption Prosecutor's Office began in 2015, following a complaint lodged with the Public Ministry by the  Superintendency of the Securities Market (SMV).

This legal action was based on information provided by the then intervener of the now defunct Financial Pacific (FP) brokerage house, José Hidrogo, which reported that some people, for their own benefit or that of third parties, would have used privileged information for the purchase of shares of Petaquilla Minerals, which is listed on the Toronto stock exchange.

The privileged information arose from the hierarchical relationship with Ricardo Martinelli, who, as the owner of the investment account 100240 in FP, invested in shares in Petaquilla Minerals when he was President.

Eighteenth criminal judge, Baloisa Marquínez, explained that the file that instructed the prosecution does not show that the ex-president is part of the summary and no charges have been filed against any person.

The Court granted an extension of eight months to the Anti-Corruption Prosecutor's Office on June 24 to conclude the investigation.

The prosecution requested the extension based on the fact that it requested judicial assistance to Canada, the British Virgin Islands and the island of Monserrat, in order to establish the connection of other persons with the illicit investigated.

Judge Marquínez stated that, although there is not a plurality of crimes, the investigation does have a certain degree of complexity and this is reflected in the 11 volumes that constitute it. Similar actions

Through his lawyers, Martinelli requested the application of the principle of specialty in two other cases filed in the Supreme Court.

The first is for the alleged abuse of authority and violation of the duties of public servants, after the issuance of 355 pardons in June 2014.

The second is related to the alleged occupation of land in Bahía Honda, Veraguas.

Maerinelli’s name is linked to some dozen  corruption investigations,  including involvement of his two sons, currently on bail in the US.