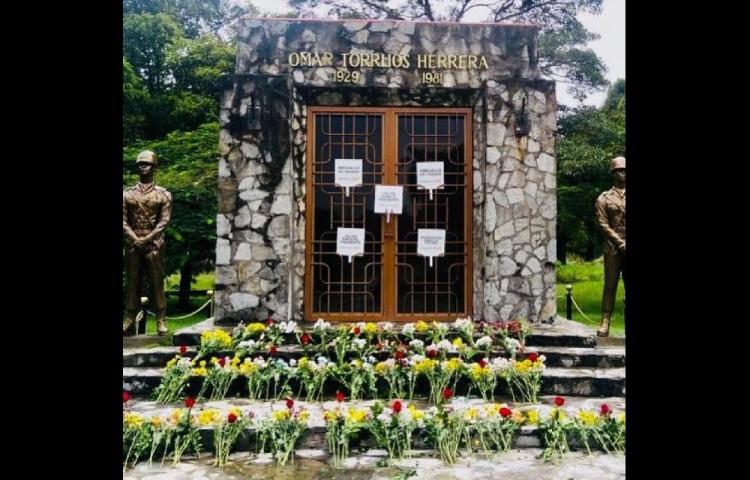 MEMBERS of the Democratic Revolutionary Party (PRD) and other citizen groups planted Panamanian flags on Amador, on Sunday, September 15 to show their opposition to using the causeway as a location for the  Chinese embassy.

The PRD militants who arrived at the site noon were led by ex-president  Martin Torrijos (2004-2009), who voiced his "rejection" of the announcement by  President, Juan Carlos Varela, that it was being studied to assign a plot of land in that area. to the Chinese.

The former US naval base that was the first to revert to Panama in 1999 thanks to the Canal treaties and the land holds a mausoleum in honor of General Omar Torrijos, who succeeded in 1977  in getting the US commitment to transfer the waterway to Panamanians in 1999, after maintaining control for 85 years.

Martin Torrijos told reporters, that "many Panamanians feel insulted" by the mere suggestion that a flag of another country flies in that territory and therefore planted the national flag to express their repudiation.

A  group of people, coming from the community of Guna Nega, also showed up in Amador to express their anger. Among them was the psychologist Geraldine Emiliani, who told reporters that "it's not fair" to allow buildings to be erected "that prevent us from walking through these lands."

The president of the Chinese-Panamanian Cultural Center, Fermin Chan, said that the shore of the Panama Canal is not the most appropriate place to build the new Chinese embassy since it is a symbol of the sovereignty of the country.

After a storm  of criticism,  a communique signed by Varela said that "the establishment of diplomatic relations with the People's Republic of China has been one of the most important decisions in the history of Panamanian foreign policy

“It entails the reciprocal establishment of embassies and, therefore, the Government of Panama will officially communicate the site assigned to the People's Republic of China after having responsibly evaluated the existing options,"

"Panama is a sovereign, neutral country that opens its doors and its channel to the world, the United States is the main user of the channel, China is the second and it is part of public life to make the right decisions for the benefit of the people", said Varela, who denied "tensions" with Washington in the wake of relations with China.