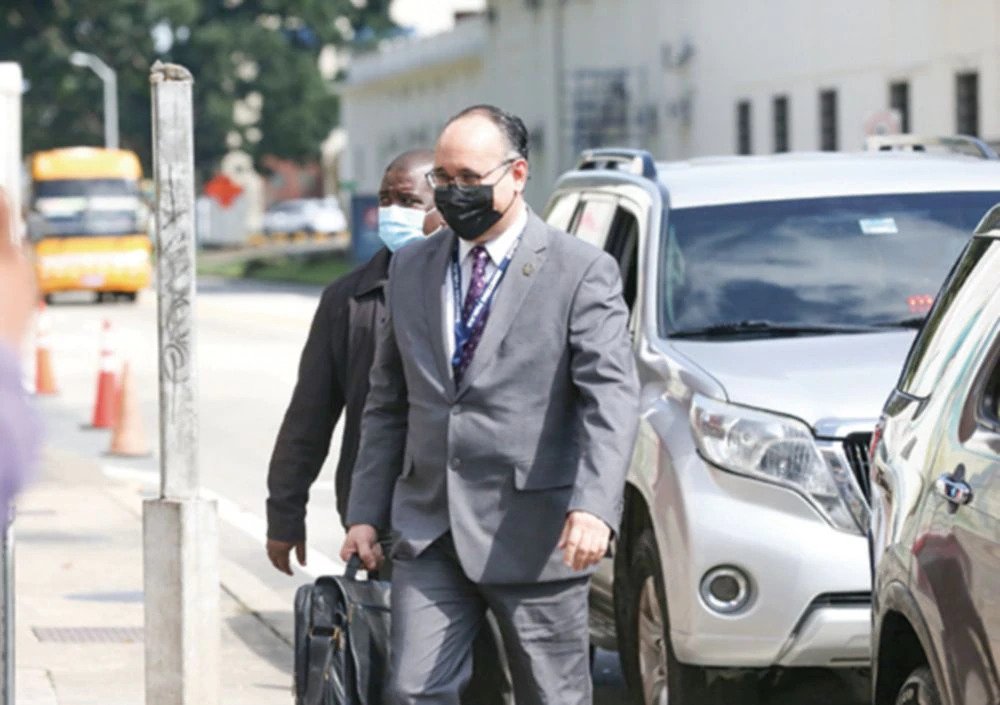 After three postponements the curtain finally went up on Thursday, August 5,  at the Balboa  Theater on the preliminary hearing of the Blue Apple case the largest criminal investigation since Odebrecht in which an alleged bribery plot was set up to obtain contracts with the Panamanian State, where there are 51 accused including the sons of former president Ricardo Martinelli the brothers Luis Enrique and Ricardo Alberto Martinelli Linares who are languishing in a Guatemala prison pending extradition to the US to face money laundering charges.

The hearing was scheduled for 10:00  am, but it was at 3:00 pm that the Public Ministry (MP) confirmed the start of the hearing: " With the allegations against 51 people for money laundering, corruption of public officials, illicit association and against public faith … On the first day of the hearing, the Guarantee Judge denied incidents requested by the defense of the accused."

Due to the number of people cited in this case, and due to biosafety protocols, journalists have not been allowed access to the audience.

The hearing is taking place at the  BBalboa Theater temporary headquarters of the Third Criminal Court for Liquidation, in Ancón, where it will be determined whether the group of defendants will be called to trial.

Although the attorneys of several defendants defenders were seen entering, Judge Baloisa Marquínez has already confirmed that she appointed public defenders, in case, not all those mentioned, and avoid further assaults, as happened on April 19, when some of the defense attorneys did not appear.

The Blue Apple investigation began on October 30, 2017, through a police intelligence report, which refers to the joint-stock company "Blue Apple Services", created by several people (members of the Martinelli government, (2010-2014), with the purpose of "disguising or laundering money" allegedly obtained from bribes received for the concession of various construction projects, nationwide, for which they used the local and international banking system with the purpose of giving the money legitimate appearance.

The alleged corruption network was made up of politicians, businessmen, and lawyers who lent themselves to launder the money obtained from the bribes paid by different state contractors establishes the investigation carried out by the prosecutor Aurelio Vásquez.

Officials requested bribes from contractors who had been awarded tenders with the State for their own benefit, with which it was possible to verify money laundering for more than $40 million, of which the Public Ministry has so far recovered $32 million.

[PANAMA COMPLEX DATA BASE OF UNDERGROUND CONNECTIONS AND A FUTURE RE-ELECTED MARTINELL WILL DESTROY PANAMA'S ECONOMY WITH LARGE NUMBERS OF ITALIAN FOREIGN POLITICAL UNCONSTITUTIONAL GOVERNMENT!]. <> Once Panamanians are forced to leave Panama City due to high living cost and inflation... the government simply takes over. Reminscent of a Venezuela dictator - Maduro (bus driver) who kills 9,000 protesters to hold power. Panama needs to lose the expansion canals to make a new deal with China for their... $10's of billions financial support to make this deal legitimate. Panama only needs to lose 51% of the share but this will most likely be 100%. Venezuela lost their factories due to a welfare program of Socialism dependent on oil. Their oil was given away to China and Russia with a $50 billion deal... a steal! Italy's underground operative in Panama knows this all too well and the Panama president Cortizo ignores any facts in the interest of Panama citizens.