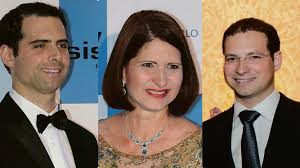 Former first lady Marta Linares de Martinelli failed in her attempts to censor the newspaper La Prensa and failed to get the courts to prohibit the publication of criminal investigations and images of her family, including in particular her sons Ricardo Alberto and Luis Enrique Martinelli Linares.

On September 23, the Superior Family Court issued a ruling in which it rejected the claim for family protection filed by the former first lady against La Prensa . The claim had already been denied by a lower court - the Second Sectional Family Court of the First Judicial Circuit - on June 16.

The Court's ruling confirms the decision adopted four months ago by the court, led by Judge Alba Flores Musmanno, who considered that the information in this newspaper was of public interest and had no relation to the intimate or private life of anyone.

Linares de Martinelli based her claim on publications in La Prensa that reported the progress of the criminal investigation for the bribes that the construction company Odebrecht had paid to Ricardo Alberto and Luis Enrique Martinelli Linares The two have been imprisoned in Guatemala since July 6, in response to a request from the United States, which requires them in extradition for alleged money laundering and conspiracy to launder money linked to Odebrecht.

The former first lady appealed to article 577 of the Family Code , which states that everyone has exclusive rights to their own image, which may not be publicly reproduced, in any way, without their consent. However, the same article cited by her says that "images that are disseminated for news purposes, of public or cultural interest, based on respect for human dignity are excepted from the above . "

For the Court, this aspect is decisive. “The person enjoys the protection of his image as a matter of principle, but once the State proceeds to a criminal investigation against him, it makes the rest of the associates, either individually or corporately, make judgments regarding the circumstances of the case, since they also have in their favor the right to freedom of thought and expression ” , concluded justices José Agustín Delgado Pérez, Aracelli Quiñones Bruno and Nelly Cedeño de Paredes.

At one point, the former first lady alleged that her children are citizens "who have neither held nor do they exercise public functions." This approach clashes with the defense of the two brothers in Guatemala, which insists that the detention of both is illegal since they are diplomats and substitute deputies of Parlacen (although they have not been sworn in or held such positions).

In this regard, the magistrates said that "it is not a question of whether or not the person exercises public functions, but rather by the impact and occurrence of the events in society, which provokes and promotes public opinion."

"If the fact under discussion becomes news for reasons of public or cultural interest, the protection of one's image is attenuated, prevailing freedom of expression," added the Court, which cited jurisprudence of the Inter-American Court of Rights Humans.

This point of view was shared by the Public Ministry, which had asked the Court to confirm the judgment of Judge Flores Musmanno, considering that the Martinelli brothers maintain a public profile, "both national and international," especially because they are related to processes that must be reported to the community in general.

The magistrates sais that “trying to restrict the newspaper La Prensa under the matter of family is not legal, since it is not an affectation or damage that should remain in the most intimate of the private sphere of the interested party and it should not be the object of public knowledge… since there is a criminal process underway.

"We consider that the case facing the plaintiff is not only local but international."