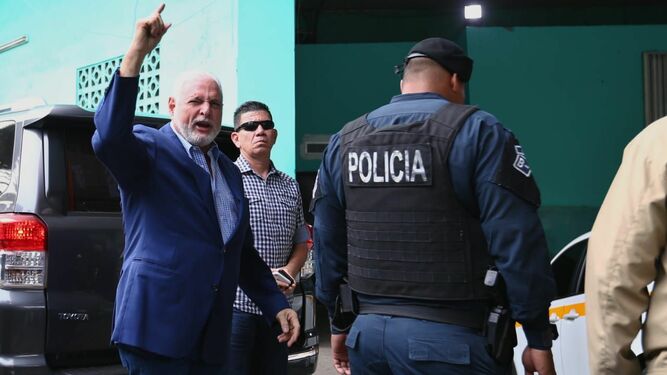 A request  by  the lawyer representing one of the victims of wiretapping during the Martinelli administration  that the  reading the sentence of not guilty to  former president Ricardo Martinelli was squahed  by order of the president of the court of oral trial, Judge Roberto Tejeira  on Monday morning, August 26

The petition was filed by lawyer Carlos Herrera Morán , who represents the complainant Mauro Zuñiga .

Tejeira, told the assistant to Herrera Morán who  presented the document, argued that on August 9 he had already communicated that he was not obliged to transmit the hearings.

According to Herrera Morán, "Judge Tejeira is afraid that citizens will know how they will square the ruling."

The petition was made by the lawyer in order to comply with the principles of publicity and transparency, based on the Constitution and the law.

On Friday, August 9, the  court, composed of Judges Tejeira, Arlene Caballero and Raúl Vergara, declared Martinelli not guilty of the crimes of political and peculated espionage.

After reading both the complainants and the Prosecutor's Office against Organized Crime, who was in charge of the process, will have a deadline to present appeals against the sentence.

The appeal for annulment is filed with the Superior Court of Appeals and must be announced two days after the sentence is read.

The appeal is brought before the Criminal Chamber of the Supreme Court of Justice and announced three days after the judges read the sentence and is sustained after 15 days.

The three judges in his sentence argued in his sentence that while there are indications that illegal activities were carried out from the National Security Council, there is a reasonable doubt about Martinelli's link to these facts.

Herrera Morán, meanwhile, alleged at that time that the Public Prosecutor duly upheld the alleged crimes charged to Martinelli.

The lawyer described as "aberrant and absurd" the decision of the three judges of the court of oral trial.