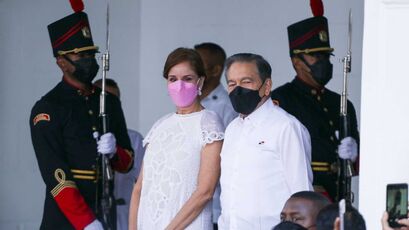 On Sunday, November 28, President Laurentino  Cortizo gave a warning to restaurant owners reminding them to fulfill their commitment to ask their customers for the vaccination card and the QR code or face new restrictions.

Cortizo said that a difficult moment in his life was when in January of this year he had to make a decision of a complete quarantine.

If they don’t comply, "it is not that they are going to lose one or two customers," they could put him in a situation of decreeing quarantine for a month or a month and a half.

The president also asked the dance organizers to ask for the vaccination card or the QR code. "That is all that is being asked."

He emphasized that restaurant owners are not going to go broke if they ask for the card or the code. “This is not a game we are playing” he said and recalled that in all countries they are requesting in stores either the code or the card.

Cortizo took the opportunity to ask the population to continue with the vaccination process against Covid-19. "That is a smart decision."

He emphasized that the Panamanian economy is recovering and that he has been able to verify this by analyzing the reports he receives on the behavior of consumers in the country.

I see the true colors of a person that has to use filthy language to try to make a point. I laugh at bottom feeding trash like you. harleyrider......what a joke!! Probably a Suzuki rider with undersized credentials.

Oh good fucking grief....another Nazi comparison from the peanut gallery. You kids don't know shit from apple butter or you wouldn't compare Nazi Germany with ANYTHING. Just because your right wing nutjob politicians make the comparison doesn't make it valid. If you nancy boys were faced with a real challenge you'd go tits up in a heartbeat.

PAPERS!! PAPERS!!. I envision a man with a swastika on his arm standing at the door demanding papers. It's not just about getting a vaccination, it is about total CONTROL. Look at what happened in Germany in the Late 1930's. This is scarily similar. I have been vaccinated because I have a need to travel. I trust God will protect me with or without a vaccination. I just do not like the unrest that is being caused by this whole thing. What ever happened to FREEDOM? We will likely never see that again. Hardly anyone is wearing masks or has been vaccinated where I live and I have not seen any influx of sickness. It's more about courtesy, consideration and common sense. NOT science. NOT new laws or demands being made by the government.

Yes, Captain, I can recall seeing pics of groups of people spreading blankets on the street in front of empty restaurants with a picnic basket laid out and enjoying themselves at the expense of the restaurants. Both vaxxed and unvaxxed mingled in their makeshift outdoor picnic. I also recall a protest whete a burning pot was set ip and the holders of those infamous “vaccine passports” threw them into the fire—standing in unity with their unvaxxed countrymen. On this site, so many are quite happy with discrimination. “Give me more!” they cry. In the NWO, we’ll all sink together.

We know very little about the new variant …it could actually be a good thing if a weaker strain . However note that the weaker symptoms as described by Dr Angelique Coetzee were in her own fully vaccinated patients.. there is another report of much more severe disease requiring hospitalisation in 20-30 year olds but only in unvaccinated/ single jabbed . Source :Rudo Mathivha head of the intensive care unit at Soweto Baragwanath hospital Get the LIFE SHOT PLEASE

Excellent idea as it has proven very successful in those countries like France that saw an immediate uptick in those getting the LIFE SHOT once it was introduced. Surprised though it was not more widely used here already and it seems not to have been widely publicised. Of course Avakian (aka Brian ) wont like it as soon they will be constrained to their Embassy / apartments which is good for the rest of us. Police need to clamp down on the growing number of non mask users especially tourists as the practise is becoming somewhat ignored. Fines are in order here .

The Virus is going to be around no matter what the Health ministry says or does. What is admitted to is that restaurants using the 100% vaccine rule are losing customers. I’ve never understood this logic when it is now “science” that there is insufficient difference between being vaxxed vs unvaxxed — both can contract, transmit, and carry similar viral loads. Methinks it was just an exercise to coerce the jab uptake with some “benefit” (also, ease of travel, access to public venues, et al) so they can’t suddenly remove those special privileges without admitting they … dare I say … made a mistake. I mean, taking the jab, going to your privileged restaurant and seeing those dirty unvaxxed being allowed in must be like joining an exclusive members-only club only to have ordinary folk being allowed in. Maybe we should also make it a law that the unvaxxed must go to the back of the bus—Rosa Parks analogy? Discrimination is discrimination and it is all EVIL. QR code or no QR code is a modern yellow star and it’s a disgrace as segregation and discrimination! But, it’s not about health—these tyrannical measures—there is a worldwide pact and countries are selling their soul (and compromising their nationL territorial land) to a New World Order and there’s got to be a bribe or payback to entice leaders to go along (or penalty if they refuse). Once the public knows the deal made with the devil (WEF, Pharma, Gates, Rockefellers, etc) protests against vaccination will be like a picnic. When part of your national territory is seized for failure to comply that that “private, never-to-be-disclosed deal”, all hell should break lose. Only, by then people will be so subservient to their authoritarian leaders that they will be powerless. Their wonderful tracking system (by then an extension of their vaccine passport/QR code) will be exactly like the CPP social credit system. When they don’t like what you’re doing, cut off access to your banking or deny access to everything by changing your QR code from blue to red. If you’re naive enough not to think this can happen, IT HAS ALREADY in one QR country. Research it. This whole NWO was never about health — the virus, the vaccine, the measures to save humanity were a door into the next planned step —total control over the population — a population that had to be reduced to what number?—500 million (per the Georgia Guidestones)? A deadly virus, a killing “vaccine” a plan for eugenics to Save the Planet — trust me: you’re gonna love owning nothing, having your activities laud out for you every day and enjoy lab-created meat. And for entertainment, social interaction, and recreation, you’ll be able to leave Reality and your dismal existence and get away to Metaverse where virtual reality is your virtual existence. And no need to think about child-rearing, if your genes do not meet standards, you’ll be given a vaccine that sterilizes you, if they haven’t done so already. This wonderful life for you will now be extended to 150+ years, thanks to mRNA/science technology. If you don’t think this is possible, I ask you to recount on Science Fiction reads or shows from not so many years ago and realize how many of those “far-out” ideas are today’s normal technology. A few of those sci-fi movies with the life I just explained is soon to be … hell, Klaus Schwab (Chairman of WEF), has already laid it out for us — “own nothing and be happy”. The New Reset, Build Back Better are just nice-sounding terms for the ultimate plan. Look, technocracy has taken over and time is running out before we become “transhumanistic” — don’t be so naive to disregard what is the plan and to believe what our authoritarian leaders tell us — look around, listen to the meaning behind their words, realize technology is going beserk at an incredulous speed, what was science fiction 10 years ago is possible today, understand the mist dangerous wirds : “we’re from the government and we’re here to help”, and ALWAYS. ALWAYS follow the money. Forget “following the Science” … today it is the religion of Scientism, a la Anthony Fauci et al.

MORE NEWS & TRUTH the murdering terrorists do not want you to know: All four individuals with detectable cases of B.1.1.529 were fully vaccinated. There have been numerous breakthrough cases of COVID-19 and the Delta variant among the vaccinated. Now, it appears that those who have taken the vaccine may be more susceptible to transmission as this new variant is associated with increased antibody resistance. https://www.armstrongeconomics.com/international-news/disease/botswanan-covid-task-force-new-variant-only-found-in-vaccinated-individuals/

COVID Vaccine Intended To Reduce World’s Population Without Anyone Suspecting Says Leading Doctor https://greatgameindia.com/covid-vaccine-reduce-world-population/ MANY DOCTORS ALL ACROSS THE WORLD ARE SPEAKING THE TRUTH!

The newest SCARIENT spread by the terrorists to terrorize the population again and continue their illegal criminal medical tyranny upon the population. These terrorists will be prosecuted and executed for their criminal actions against humanity. They know it and we know it! This is their last desperation and only the most idiot class in society are scared now. THE TRUTH IS MORE POWERFUL THAN LIES, DECEIT AND FRAUD! Omicron COVID Variant Causes Only Mild Disease Says South African Medical Association https://greatgameindia.com/omicron-causes-mild-disease/

The murdering terrorists don't want people to learn the truth that is everywhere now in the world! The world is waking up faster than the criminals can spread lies and propaganda. Why Isn’t Everyone In Bangladesh Dead From COVID? https://greatgameindia.com/why-isnt-everyone-in-bangladesh-dead-from-covid/

He is a murdering terrorist and treasonous bastard!

The President is CLEARLY an IDIOT! Present me evidence of a isolated deadly virus...then try to convince me that the vaccine which is useless, is safe - biggest Paradoxon of 2020 - .... and THEN explain..why the ICU are FULL of vaccinated people (worldwide).... after all that dare to open your mouth again. I repeat..this guy...is for us useless...but for the ones pushing through the agenda...a usefull IDIOT! Que verguenza Panamá!

Panama is experiencing an acute economic crisis from the covid pandemic, with unemployment currently hovering around 14.5% after having reached 18.5% in 2020. this is the outcome of you doing it last time

countries that have more then 90 percent with all shots, have the highest in hospitals and deaths with all of those having all shots. are you not seeing how many footballers and others falling dead from heart attacks? 12 year old to 28