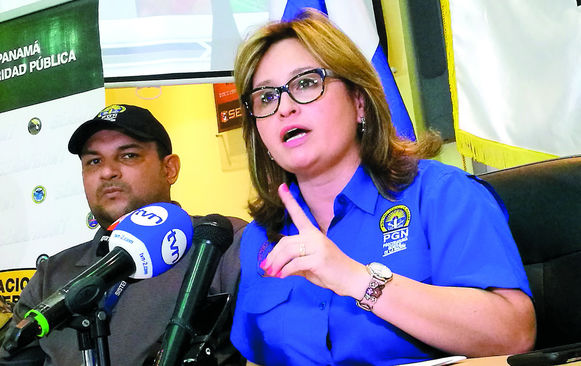 On the eve of a citizen demonstration against corruption and impunity, Panama’s Attorney General Kenia  Porcell, has once again called on officials of the Judicial Branch and the Electoral Tribunal (TE) to promptly resolve the requests of prosecutors to advance high-profile investigations.

At  a Saturday, March 10 press conference  she  addressed the status of high-profile cases, such as Blue Apple, New Business, and Odebrecht, which are paralyzed by decisions that officials have failed to take

In The  Blue Apple, the case of the payment of bribes by  State contractors of officials and individuals, the Sixth Anti-corruption Prosecutor is waiting for the Eighteenth Criminal Court to declare the investigation complex to obtain new deadlines to continue with the investigation.

The New Business case  related to transactions for the purchase of Editora Panamá América, by a group of Martinelli insiders is also swinging in the wind.

In the Odebrecht bribery investigation, by  February 26, four months had elapsed waiting for the Judicial Body to return the file to continue with the investigation. "The  Odebrecht case, is paralyzed  We ask  that you let us investigate,” said Porcell

Substitute judge Lania Batista denied the adequacy of the deadlines of the Odebrecht investigation requested by the special anti-corruption prosecutor Zuleyka Moore after the July 13 case was declared s a complex cause.

On November 6 last year, Attorney Moore appealed the ruling of  Judge Batista. Then, lawyers of the accused in the process appealed

Moore's decision, alleging that the judge's ruling is not included among the resources that can be appealed.

The AG also referred to hiding behind party elections to avoid court appearances for some of the accused in high profile cases.

She said a lot of investigations are paralyzed because the TE still does not answer, and"Meanwhile the time of the processes continues running".

"We find that we have specific investigations ... we want to reach the end, we know who they are, we have the information, but we cannot continue because we have the order 'do not continue'.

She gave as an example the case of wiretapping, which was the first case that the MP referred to the Judicial system in 2015. "We are already going for the sixth suspended hearing.”

Another case that will be asked to be declared reopened as a complex cause is the use of public funds by deputies in the last elections through the communal boards and the municipalities.

On February 27, the Office of the Comptroller sent to the MP 186 audits of the communal boards and municipalities, showing that 70 deputies of the Assembly -39 of them reelected - transferred $247 million to the community boards and abuses and anomalies have been revealed.