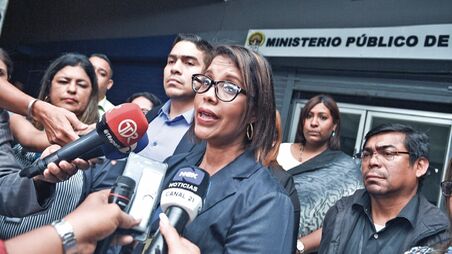 Panama’s  Second Superior Court has denied extending the deadline for further investigation of the biggest corruption scandal in the history of Panama -bribes paid by the Odebrecht Company during three administrations.

After the August 2 decision which means  that key information  could be missing from the case being developed by anti-corruption prosecutors Prosecutor Zuleyka Moore  told media last night that there is still an analysis of what happened  the 2006 and 2008 period, when Martin Torrijos ruled the country; and the documents that were leaked to the International Consortium of Investigative Journalists that refer to the nicknames of some who received millions of bribes  in the Torrijos and Varela administrations.

"It is a very unfortunate subject because it is a line of investigation that the Public Ministry did not reach," Moore said.

She said that, unlike Panama, countries such as Colombia, Salvador, Peru, Ecuador, Brazil, Argentina, and Mexico still have ongoing research.

Moore said they will analyze what will be the next steps of the Public Ministry and what resources they will interpose. The prosecutor said the case was opened in January 2017 and was paralyzed for six months, waiting for the Twelfth Criminal Court to give an extension. In the end, the court gave them one more year for the investigation, which expired in April.

There was no official pronouncement or even a press release. The news was disseminated through Twitter, in the Judicial Branch account after 4:00 pm.

Prosecutor Moore warned that Martín Torrijos's period or documents that were leaked to the International Consortium of Investigative Journalists cannot now be investigated.

With this scenario, the prosecution will not be able to continue investigating the bribes that the Brazilian company would have paid during the period of the government of the PRD Martín Torrijos (2004-2009). Nor will it be able to analyze information from the Structured Operations Sector - the Odebrecht department of bribery

$100 miilion bribes
In total, according to what prosecutors have disclosed, Odebrecht distributed more than $100 million in bribes in the country. Between 2010 and 2014, when Ricardo Martinelli was president they paid $96.7 million in exchange for public works contracts. While between 2006 and 2008, with Martín Torrijos as ruler, according to prosecutors, they would have delivered bribes for about $10 million.

Five projects awarded under the presidency of Juan Carlos Varela (2009-2014) were investigated. The Panamenista Party, to which Varela belongs, would have received $ 10 million from the construction company through former South Korean ambassador Jaime Lasso, through the V-tech and Poseidon societies.

Between 2006-2008, during the management of Torrijos, Odebrecht was awarded three works: the Remigio Rojas system, the Cinta Costera 1 and the Madden-Colón highway. The companies: Marpesca Seatrade LLC, Caribbean Holding Services, Ltd., Vernell Development Corp, and World Securities, among others, were under the spotlight.

"Despite all the obstacles the Public Ministry has been through, the Odebrecht investigation is a strengthened investigation," said Moore.