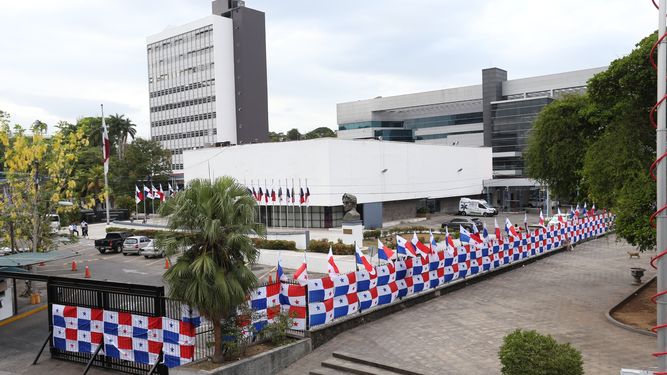 In a perceived attempt to stifle a citizen “Clean  Up Panama”   protest planned for Sunday, March 11,  The National Assembly has covered the metal fence that surrounds the building with hundreds of national flags.

The fence was to have been used to hang banners and signs attacking corruption and impunity, with many of the sitting deputies facing probes over misuse of public funds,  likely targets.  of the protesters.

The blocking move was criticized by civil society representatives and organizers of the demonstration.

Ubaldo Davis a broadcast personality and one of those who have called the demonstration, which follows an earlier gathering on the Cinta Costera which drew over 10,000, said that the deputies took the national flag as a shield to "block concentration.".

Social networks messages say that, despite the tactic, it will not prevent them from displaying their banners with messages in rejection of corruption or from hanging them on the fence.

Law professor and, presidential candidate Miguel Antonio Bernal said that The collation of the flags was  "an act of malignancy by those who are there [in the Assembly]  and they are making an inappropriate use of a patriotic symbol and they use it as an instrument to restrict freedom of expression," he said.

Paulette Thomas, singer, and businesswoman, said that the deputies have saved participants the work of taking

flags to the protest. "I want to invite all, once again, to join us this Sunday 11 at 9 in the morning here at the Assembly. Bring your banners with allusive messages.